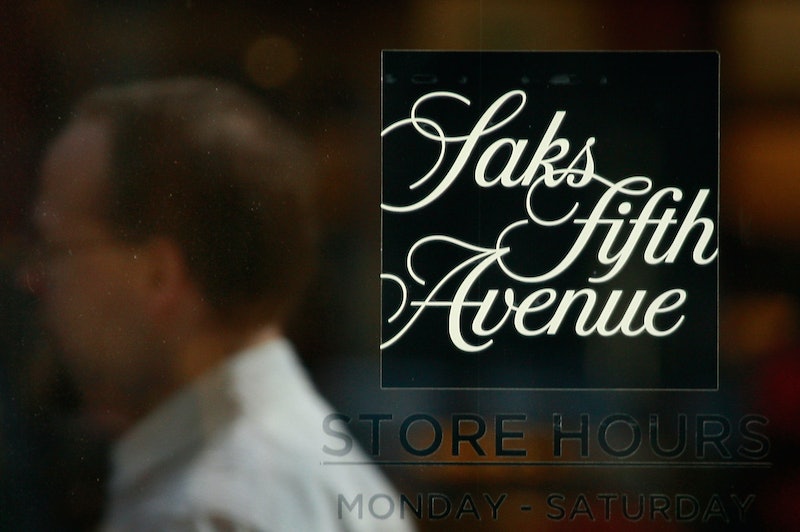 As tempting as a free pair of designer shoes sounds, most of us have resigned to the fact that Louboutins are not going to drop from the sky any time soon. However, a group of employees at New York City's Saks Fifth Avenue reportedly thought that obtaining designer goods for free was just as easy as stealing customers' credit card information. According to a criminal complaint filed, those six Saks Fifth Avenue employees used the credit card information to steal $400,000 worth of merchandise during the span of a months-long shopping spree. Yes, that's almost half a million dollars. You read that right.

The group involved with the scam used credit card information of 22 Saks customers to purchase designer goods for themselves that ranged from handbags to shoes. Although the group did manage to steal $400,000 worth of designer items, Saks told the Huffington Post that all the customers affected have been notified accordingly.

"All customers have been notified and their accounts have been restored," Saks said in a statement."Customer security is our utmost priority and we take these matters seriously."

According to reports, some of the merchandise (including "hundreds" of pairs of shoes) was recently recovered after being found in the apartment of the supposed "ringleader" of the entire operation during a police raid.

ABC News reported that the so-called ringleader would steal the credit card information of Saks customers, pass it along to her accomplices, and inform them what they should buy with the fraudulent credit cards.

Along with the ringleader, five other people have now been arrested for the scheme. All have been charged with grand larceny and identity theft.

Identity theft cases such as this one, which occurred at such a high-end and respected store, make me as a shopper wonder if it's safe to use a credit card anywhere. As Saks has stated, customer service is of the utmost importance to their company. If that's the case, then how could a scam as large as this one go on for so long (four months to be exact, according to the complaint)? The incident begs questions about those involved as well. At least in the case of the head organizer of the scheme, I highly doubt that this was her first experience with fraud. Do background checks simply not account for this sort of thing?

In any case, I'll certainly be thinking twice before using my credit card on any major purchases in the future.