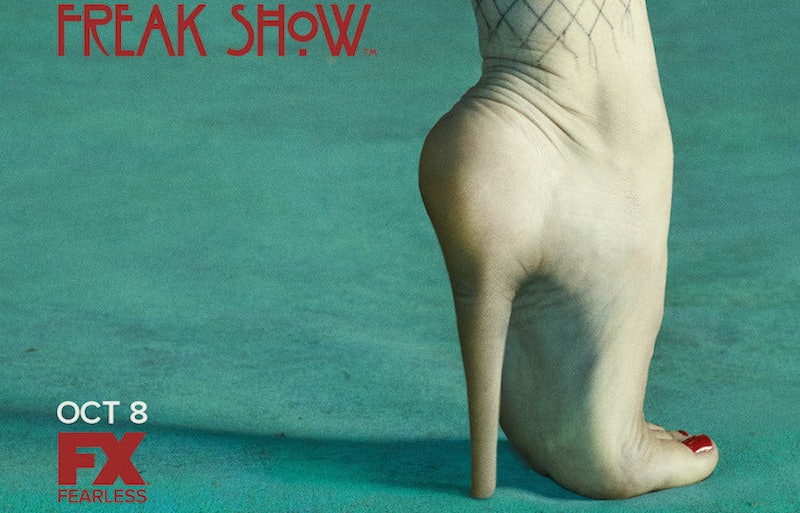 Yesterday, FX released a new poster for American Horror Story: Freak Show that was creepy — as most things associated with this show should be — but only in a subtle, "once you see it" sort of way. It wasn't the in-your-face creepy that American Horror Story: Freak Show 's new poster is clearly inspired by, with its shot of a foot that has literally been contorted into the shape of the highest heels you've ever seen...while still retaining the look of a real foot. My feet hurt even just looking at the thing.

Painful creepiness aside, it does raise even more excitement for how much of the scary AHS: Freak Show is going to bring once it premieres next month. The first few seasons of the show were always creepy — sometimes gory — in their own ways, but there's always been a lightness to them that it doesn't look like Freak Show is going to possess as much of. Whether or not this will be a good thing remains to be seen, but it's certainly a promising thought.

Plus, Jessica Lange looks even more badass than ever before (with a German accent!), and that's saying something.

Check the poster below. Freak Show will premiere on FX on Oct. 8.

More like this
'Black Mirror' Season 6 Is Reportedly In The Works, Here’s What To Expect
By Maxine Harrison
Twitter Is In Utter Meltdown After 'Derry Girls’ “Poignant” Finale
By Sam Ramsden
What Does Michael Peterson’s Family Think Of 'The Staircase'?
By Arya Roshanian
Everything To Know About ‘The Handmaid’s Tale’ Season 5
By Amanda Whiting
Get Even More From Bustle — Sign Up For The Newsletter