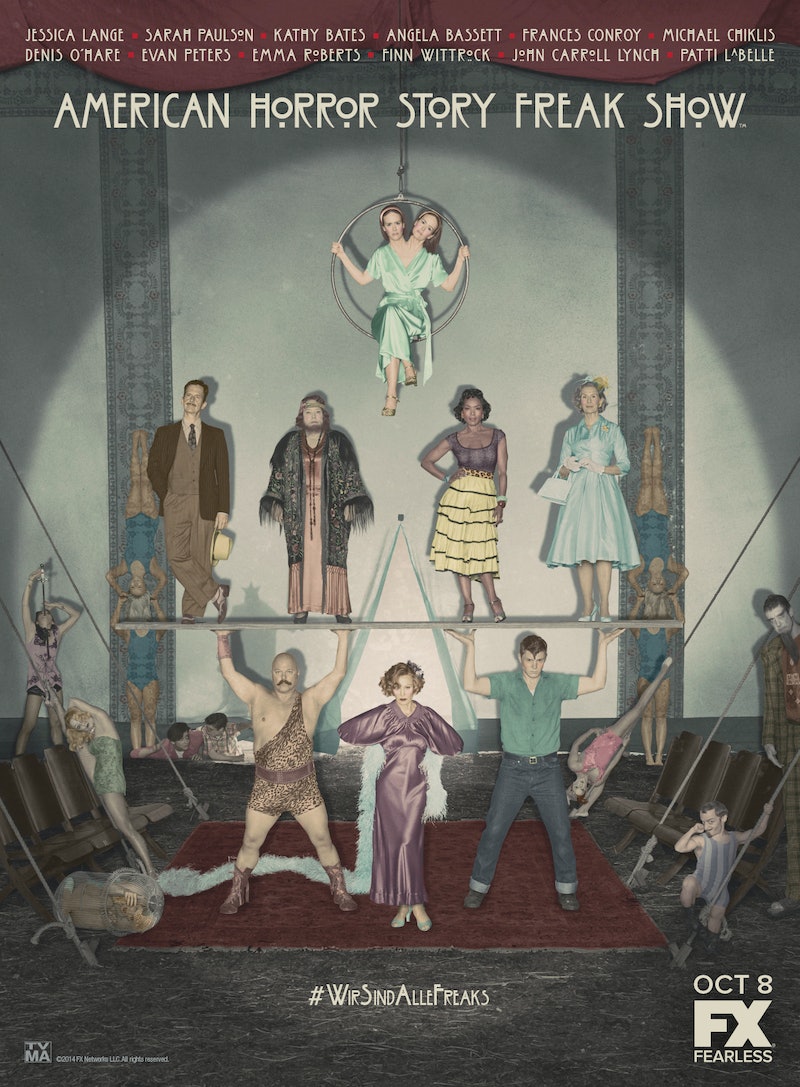 Ryan Murphy has certainly given fans a lot to think about lately. Not only has he released nearly a dozen American Horror Story: Freak Show teaser trailers throughout these last few weeks (many of which that have already made guest appearances in my nightmares), but now he's even giving us insight into actual plot details. Just recently it was revealed that Asylum fan favorite Pepper will return and demonstrate what life was like for her Under the Big Top before being banished to Briarcliff. And thanks to some very informative AHS cast art, we officially know what major characters will come into play in what already promises to be the most spectacular freak show on earth. But Murphy's hints were just getting started.

The showrunner recently chatted with Entertainment Weekly and divulged a few very interesting Freak Show details, including the fact that the Season 4 big bad will, indeed, be a retired and murderous clown called Twisty, who is none too happy to see Elsa's freak show come to town. And while that by itself is enough to send us all into early therapy, what's possibly even more disturbing is the fact that Murphy promises that death will be much more permanent this time around.

"This season, once you die, you’re dead," Murphy told the site. "There’s no supernatural thing to bring you back like last year." And since this is a show that isn't afraid to kill off even the most prominent characters, that leaves pretty much everyone extremely vulnerable. But, like anything, there are some who are probably in more danger than others. Check out my character survival predictions below and see who I think won't make it out of this season alive.

Let's be real here… chances are Murphy is going to want Lange's character sticking around for as long as possible, especially considering this may be her last season with the series. And even if he does end up killing her, it will be at the very, very end of the season — I'm talking like in the last five minutes of the finale like what happened in Asylum and Coven. She's just too strong of an asset to lose. I say she's safe.

Murphy just loves giving Peters' characters a rough time. I mean, remember when he was dead throughout all of Season 1 and most of Season 3? Yeah, I'd say his life span should definitely go in the danger column, which is a shame since he's always so nice to look at.

The way I see it, two heads are better than one.

Trust me, I hate the thought of Bassett's character meeting her maker, but I'm not sure how having three breasts is going to help her evade death from a killer clown. I guess they could be used as a great distraction, though I really would rather not think that a clown seduction scene lies in my future. Sorry, folks, but I think Desiree's days are numbered.

If Desiree dies, I'm guessing it's because her big "strongman" husband wasn't around to protect her from harm. You'd think a guy as strong as that would be safe, but I don't think Murphy's that predictable. Just when we think he's going to go left, he goes right.

To be honest, I'm not entirely sure why I think this since I'm not sure how being able to grow a beard will exactly help during a murder attempt, but Bates' Ethel just looks like a woman who you don't want to mess with. (Or perhaps I've simply watched Misery too many times?) Either way, I think she's got a real shot of making it.

This character is a fortune teller with a crystal ball. She should be able to see her own death coming, but when has that ever proven to be the case? It doesn't take a palm reader to know that this life line is about to get cut short.

She's a wealthy society member. I'd say the odds are definitely not in her favor.

Much like Peters, O'Hare's characters always seem to have the worst luck on this show. But I'm hoping he'll keep up the tradition of hitting on/getting rejected by Lange's character. That's always a good time.