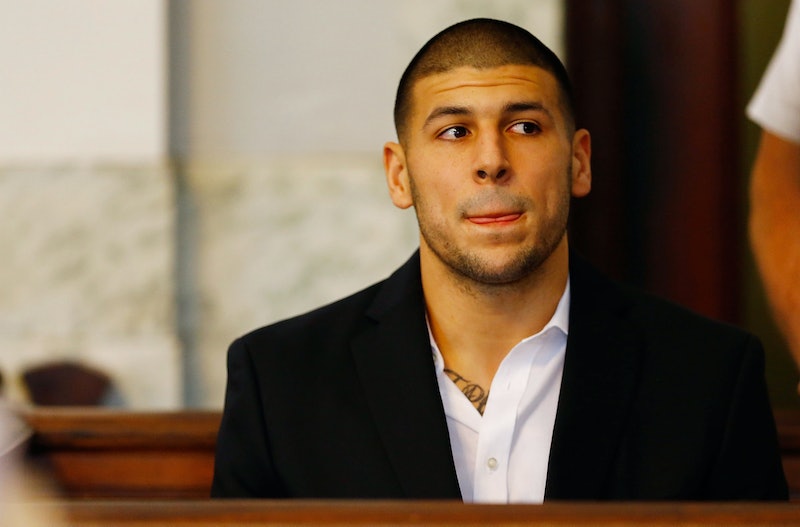 Former New England Patriot Aaron Hernandez has enough evidence against him to formalize charges for first degree murder, a district court in Boston decided Thursday. Prosecutors surprised the court by laying out charges at what was supposed to be a routine probable cause hearing.

The 23-year-old ex-tight end will be held without bail until the trial begins for the murder of Odin Lloyd, a semi-professional football player found dead near Hernandez's home in a Massachusetts suburb. Hernandez also faces five weapons charges for illegal possession of firearms. If he's convicted, he could face life in prison.

Prosecutors argue that Hernandez wanted Lloyd dead after an altercation at a nightclub. In response, his defense team says the evidence is "weak and circumstantial." Defense attorney Michael Fee even claimed to be "pleased" about going to trial: "There has been an incredible rush to judgment in this case," and the state doesn't have enough evidence to prove the charges."

Fee should be very pleased: Hernandez isn't the only one facing surprise charges today. His associate Ernest Wallace is charged with accessory to murder after the fact, and his cousin Tanya Singleton is charged with criminal contempt of court for lying to the grand jury.

More like this
A New Netflix Doc Will Explore The Unsolved Murder Of Jill Dando
By Sam Ramsden
'Love Island's Aaron Waters Is Determined To Do This One Thing In The Villa
By Sophie McEvoy
This First Look At 'The Gold' Shows Jack Lowden In A Whole New Light
By El Hunt and Sam Ramsden
A Teen Murder Victim's Horrific Diary Entry Helped Police Find Her Killer
By Brad Witter
Get Even More From Bustle — Sign Up For The Newsletter
From hair trends to relationship advice, our daily newsletter has everything you need to sound like a person who’s on TikTok, even if you aren’t.