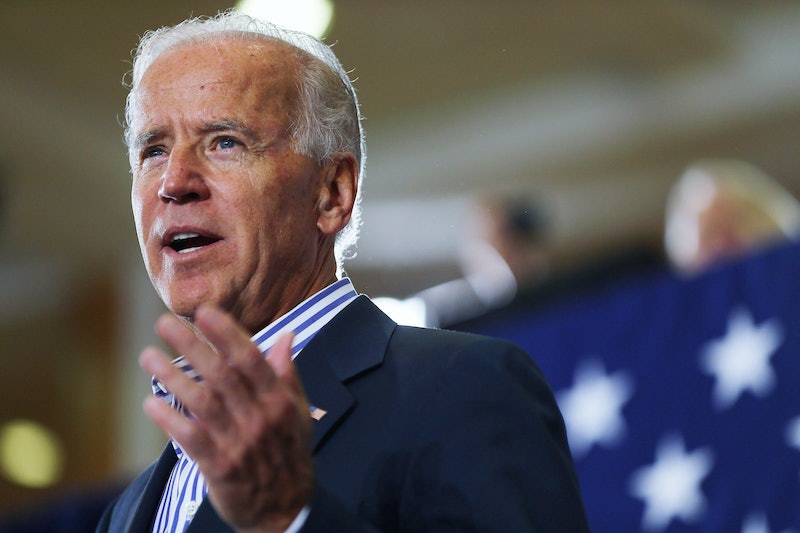 Vice President Joe Biden has a way with words — usually a lively, unexpected way that works in his favor. (Gates of hell or malarkey, anyone?) But everyone's favorite vice president has gotten into a bit of verbal trouble this week during his visit to Iowa. Biden made two speaking gaffes, both of which used derogatory words for two different cultures. Needless to say, the slip ups did not go over so well.

For his first faux-pas, Biden used a largely anti-Semitic term while delivering a speech at the 40th anniversary celebration for the Legal Services Corporation on Tuesday. The word, "Shylock," now colloquially refers to greedy moneylenders. However, the term originates from the William Shakespeare play The Merchant of Venice, where a Jewish character named Shylock is portrayed as a ruthless moneylender. The Anti-Defamation League considers the word hateful and offensive.

People would come up to him and talk about what was happening to them at home in terms of foreclosures, in terms of bad loans that were being — I mean, these Shylocks who took advantage of these women and men while overseas.

The vice president later issued an apology after Abraham Fox of the Anti-Defamation League criticized Biden for using the term:

Abe Foxman has been a friend and advisor of mine for a long time. He's correct, it was a poor choice of words, particularly as he said coming from 'someone as friendly to the Jewish community and open and tolerant an individual as is Vice President Joe Biden.' He's right.

Unfortunately, Biden had another lapse in verbal judgement. While speaking at the Nuns on the Bus kick-off tour event in Des Moines, Biden referred to Asia as "the Orient" — an archaic term that's generally refers to inanimate objects, and not people. His speech was supposed to come off as a compliment but instead, it was completely tone-deaf:

On the way back from Mumbai to go meet with President Xi in China, I stopped in Singapore to meet with a guy named Lee Kuan Yew, who most foreign policy experts around the world say is the wisest man in the Orient.

Just like the day before, no one let this one slide. Ninio Fetalvo, an Asian-American spokesperson for the Republican National Committee, released a statement on Wednesday condemning Biden's choice of words:

Vice President Joe Biden’s insensitive remarks are offensive to both Asian-Americans and our Asian allies abroad. His comment is not only disrespectful but also uses unacceptable imperialist undertones. It’s time for the vice president to apologize and to understand that his comments embarrass our country.

What's going on, Biden, ever the charmer? You better step up your verbal game if you're planning on battling Hillary Clinton in 2016.

More like this
What Is Barack Obama’s Net Worth? He Makes *Way* More Now As An Ex-President
By Hugh McIntyre
Photos Of Boris Johnson Drinking At A Downing Street Lockdown Party Have Surfaced
By Bustle UK
President Zelensky Spoke Out On Ukraine's Chances Of Hosting Eurovision Next Year
By Sam Ramsden
BTS Is Visiting The White House To Discuss Anti-Asian Hate Crimes With President Joe Biden
By Jake Viswanath
Get Even More From Bustle — Sign Up For The Newsletter