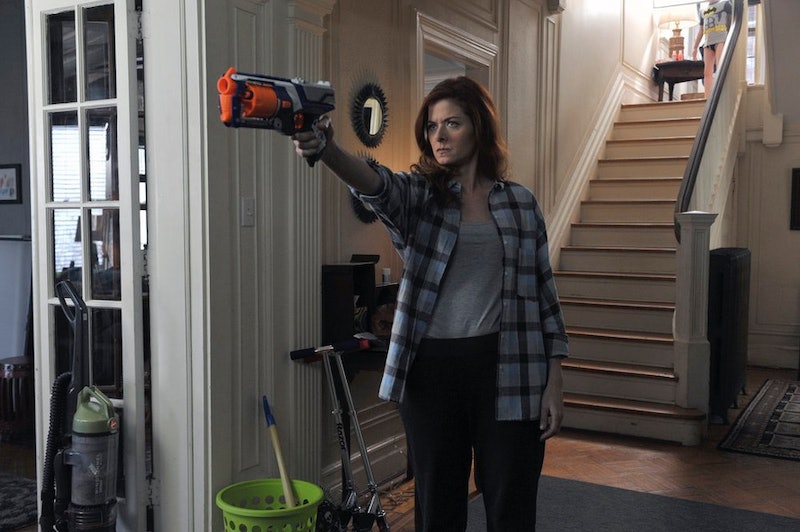 Tuesday night's premiere of Debra Messing's new dramedy, The Mysteries of Laura brought us a new kind of female detective. You probably remember Messing from her days as one half of Will & Grace, or even those days we're trying to forget when she was on Smash. Well, now for something completely different, here we have Messing playing a tough cop by day, stressed parent by night. Maybe you've seen the promotional posters that feature Messing between a man being arrested and her kids with the tag line: catching bad guys, raising naughty ones. Get it? She can juggle it all! Or, at least she's going to try to, which leads us to the pilot episode.

Right away, the episode sets up that Laura Diamond is doing her best to deal with both work life and home life. While investigating her latest case, she shows up at a fancy rich person's house where the Real Housewife tells her, "A middle aged police woman, just like on TV!" Yes, there are in fact a lot of middle-aged police women on TV, ranging from the girls on CSI (and all its spinoffs) to Castle's Kate Beckett, to Law & Order: SVU's Olivia Benson.

Of those names, Benson is probably the most recognizable, and not just because Taylor Swift named her cat Olivia Benson. Mariska Hargitay has played Benson for 16 seasons, which is a television life any actress would dream of having. Over the years she has evolved as both a character and a detective, and is currently a sergeant. I would hands-down trust her with my life if necessary. In 16 seasons, when you think about all she's been through, my gosh, it's staggering. Where do I even begin? Just last season, she was kidnapped (by Pornstache, no less). Rather than going for the comedic route, SVU is all business, all the time.

Mysteries of Laura is a far different kind of show, and Laura is a very different detective. Honestly, she kind of plays like Liz Lemon, if Liz Lemon were a detective, and now I kind of wish that had become a spinoff. Her car is full of old fast food wrappers, she's doing her best to handle her hyper children (along with her soon-to-be ex-husband, played by Josh Lucas), and she name drops Target. Twice.

Can you imagine Benson teaming up with Laura, who at one point references the cost of something as "a lot of mac and cheese?" I get that they are two completely different shows, with SVU portraying "ripped from the headlines" stories and Mysteries of Laura trying very hard to balance cop life and home life along with murder and literal kindergarten mayhem. But in order to get into a suspect's car, Laura bats her eyes and giggles a little and somewhere out there, I imagine Benson like:

Laura is in fact good at her job, but in kind of the same way Jake Peralta is good at his job. By episode's end we've come to understand that she really is doing the best she can for her family, even among the chaos. This was only the first episode, remember, so maybe over time she'll gain the tough grit Benson has to ask the tough questions (and possibly leave us with nightmares regarding true crime events). But shouldn't "pulling out all she's got" to bring down the bad guys involve suspense and heart-pounding action, not her cleavage? In the final seconds of the episode, it's announced that her ex, Jake, is now in charge of her precinct and she yells out a well-timed, "ARE YOU KIDDING ME?" Not at all, Laura.

I love a good procedural just as much as the next person, but Mysteries of Laura might be a little too light and fluffy. As Time, and well, everyone on the internet has pointed out, NPR's Linda Holmes is calling the show "CopMom, MomCop," and I made the mistake of listening to her hilarious jingle just before 10 p.m., so I spent the hour kind of upset that wasn't actually included in the episode. No one would ever have the gall to call Benson "CopMom" and that's probably a good thing.

More like this
What Does Michael Peterson’s Family Think Of 'The Staircase'?
By Arya Roshanian
Everything To Know About ‘The Handmaid’s Tale’ Season 5
By Amanda Whiting
'Stranger Things 4' Filmed At A 100-Year-Old Lithuanian Prison
By Kadin Burnett
The 'Grey’s Anatomy' Season 18 Finale Might Have Had A Sneaky April Easter Egg
By Grace Wehniainen
Get Even More From Bustle — Sign Up For The Newsletter