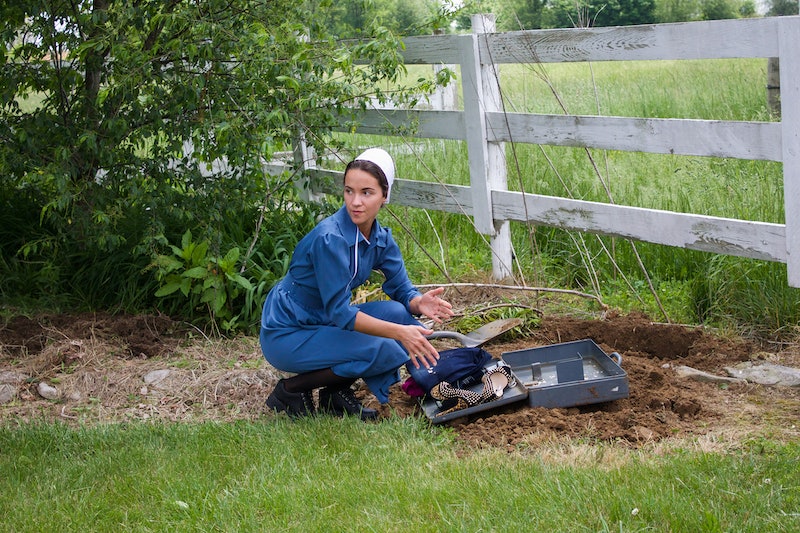 As we learned from the first two seasons of Breaking Amish, it's actually quite common for young Amish men and women to leave their strict religious communities and participate in English activities. We've heard many of the previous Breaking Amish cast members leave their communities — sometimes for a night, sometimes for months or longer — to party, date, and even break the law before returning to their Amish lives. Yet, I am sure with Breaking Amish Season 3 premiering Thursday, Sept. 18 on TLC, there will be plenty of naysayers out there that claim this show and its cast are fake.

The same thing famously happened during the first season of the show. Soon after the premiere, photos and information surfaced of seemingly non-Amish-like marriages, babies, and arrests from the Season 1 cast. This prompted many to question the legitimacy of the show, which TLC had originally promoted as the first time these young people would be leaving the Amish.

Though most of these revelations were true, the original Breaking Amish cast, who are now all living in the English world, continues to defend the legitimacy of their former Amish lifestyles. They even did so as recently as on this summer's Return to Amish reunion special.

Whether or not this new batch of Breaking Amish cast members is really Amish, there will likely be speculation about its authenticity. And it's come even before the show has premiered.

While there definitely hasn't been as much concern over this cast's legitimacy as there was for the original Breaking Amish crew, there are some early red flags. Most notably, some racy photos of Vonda have surfaced online. Two of them are mug shots for "resisting law enforcement," according to Starcasm. The website has also uncovered some photos of Vonda in definitely not Amish-approved attire, reportedly from her MySpace page. Clearly, Vonda spent some time away from the Amish.

She also currently has a Facebook page, which looks like it was set up before she joined the Breaking Amish cast. It appears that Vonda is wearing Amish clothing in her photos on Facebook, but she may also be wearing makeup, which is a big no-no. So it looks like she has been living with the Amish for some time, but is ready to bust out of the community. There's also the question of the mysterious non-Amish guilty pleasure Vonda takes part in that's teased in her bio video. My guess is that the girl just likes to get spray tanned. There's no way she's getting that kind of color at her job cleaning hotel rooms all day.

Miriam has also spent some time away from the Amish, which she readily admits to in her bio video for the show. She had a son out of wedlock with an English man and her community has shunned her ever since. Because of that and her overall unhappiness with the church, Miriam has switched between living as Amish and English during the past few years. So if we discover any more non-Amish behavior from her past, it's probably due to that.

Finally, Bates, whose name just always reminds me of Downton Abbey, has also admitted to drinking, partying, and getting his hair styled into a mohawk, none of which are things the Amish are allowed to do. And the latter of which no one should be allowed to do. He also has an ex-Amish girlfriend, so I feel like there are some not-so-Amish moments from his past that are just waiting to come out during this season.

As for the remaining two cast members, Barbie and Matthias, there's nothing so far that hints at them feigning their Amishness. However, I anticipate more allegations to arise about all of the cast members when the season finally kicks off. I think the Internet and social media will once again be powerful tools to "expose" their hidden pasts, or at least provide major talking points for the reunion at the end of the season.