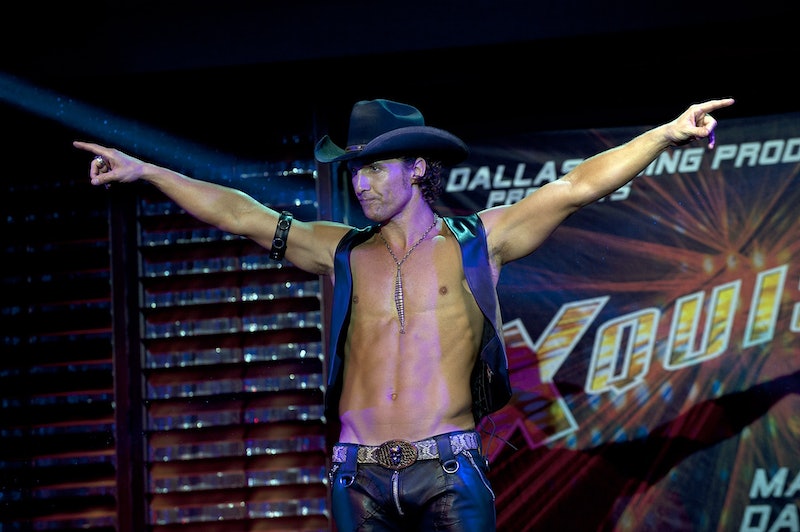 The moment Magic Mike fans were hoping would never happen has finally arrived: Matthew McConaughey will not be appearing in Magic Mike XXL. The rumors that this blow was coming have been flying, but none of us wanted to believe it until it was confirmed. I mean, Magic Mike was such an integral part of the McConaissance. Plus, male strippers! Why would McConaughey want to bow out of that? Sure, Taye Diggs wants to be in Magic Mike XXL, but is that enough to fill the McConavoid in our lives? (Too much?)

The news was broken by director Greg Jacobs during an interview with The Playlist and the way he spoke made it clear he couldn't hear the sound of a thousand hearts breaking all over the country. Apparently, the lake of McConaughey is due to the plot of the film, which will apparently be a road trip movie. "It’s different enough that once you see it you’ll understand why we made a sequel. No one will be accusing us of making the same movie twice."

I don't think Jacobs has to be worried about telling the same story twice as much as he has to be worried about rioting in the streets when people finishing processing the fact that Dallas of Xquisite is O-U-T out. But, fine, if we have to watch a Magic Mike sequel that denies us McConaughey's abs, then Jacobs is going to have a lot to make up to us. As in, here are seven celebrities I expect to see filling the shirtless void.

Look at those biceps. And, besides, Diggs has already expressed interest so it wouldn't be hard to lock him in.

Efron already has an extended dancing resume and he's just recently gotten into stripping on stage as an art form. Not giving him a call would just be insane.

We all watched Game of Thrones. We all know what Momoa is rocking under there. (Rock hard abs, that is.) I'm sure if we beg him enough, he'd be more than willing to go from being Aquaman to being a male stripper. I mean, who wouldn't?

Gosling is either currently a father or was never having a baby to begin with. We still don't know the answer to this mystery. But nothing would complicate the mystery further quite like filming scenes as a male stripper right after your daughter was allegedly born. It's the acting equivalent of Beyoncé sipping champagne after her pregnancy rumors.

Stamos already proved with an Instagram photo that he's still got it no matter how many years it's been since he was Uncle Jesse. Does imagining Uncle Jesse as a stripper ruin your childhood or enhance it? Be honest.

Much like Efron, Usher has a long resume history in dancing and in being shirtless. Plus, half of his songs would be awesome melodies to strip to so they could get him on board for a two-for-the-price-of-one deal. Or, you know, lure him to the film set to record a song and trick him into filming a scene. Whatever.

Being attached to star in 50 Shades of Grey might have given him some kind of breakdown, but that doesn't mean Hunnam should count himself out as a sex symbol just yet. After all, Christian Grey is a lot of things, but he's not a male stripper so Hunnam would definitely have a leg up on him there. Actually, if they're getting rid of McConaughey then they'd better just hire all of these people at once. That's a pretty big void that will be left, you know.