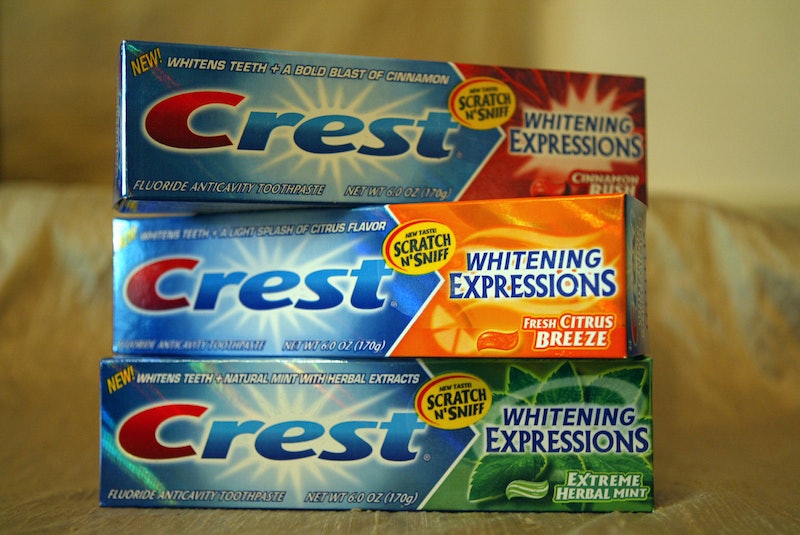 If there's one place you don't want a scary ingredient, it's in your mouth. You especially don't want it being used to clean your mouth, three times a day (okay, okay, twice), every day of your whole life. But it turns out that Crest has plastic "microbeads" in its toothpaste, the potentially gum disease-causing kind. Thankfully, though, the brand has gotten smart, and is making plans to fix the problem.

Before you panic, rest assured: This is not nearly as traumatizing as the revelations that Colgate Total contains a cancer-causing ingredient called triclosan. It's still somewhat unseemly, though. This week, a Chicago television station investigation revealed that Crest puts plastic bubbles in its Crest's Pro Health and 3D White toothpastes, and for cosmetic purposes only.

Specifically, the microbeads are made of something called polyethylene, the world's most common plastic. It's what's used in grocery bags, cutting boards, and bottles. So if you've been using Crest (which, full disclosure, I have), there's a good chance that plastic is getting stuck in your teeth or in your gum-line. This, according to various reports, can then attract bacteria, which leads to a whole host of gross gum problems.

They’ll trap bacteria in the gums which leads to gingivitis. And over time, that infection moves from the gum into the bone that holds your teeth in and that becomes periodontal disease. Periodontal disease is scary.

Any time you have any foreign body in the pocket around the tooth, it's a breeding ground for bacteria," Dr. Brian Moore said to Tulsa news station KJRH.

As ABC points out, the microbeads don't just get trapped in your mouth, they go into our water supply, get swallowed by fish, and then end up in our stomachs, after a nice fish fillet dinner. They've now been completely banned in Illinois — by 2017, all companies in the state should have eliminated the ingredient from their products.

Although polyethylene had been approved by the FDA — not that we particularly trust the FDA's approval system anymore, seeing as they didn't care that triclosan had been linked to cancer in animals — Crest has now received so many complaints that it has agreed to take out the microbeads within six months. Bustle has reached out to Crest for comment; in a statement published by ABC, the company said:

While the ingredient in question is completely safe, approved for use in foods by the FDA, and part of an enjoyable brushing experience for millions of consumers with no issues, we understand there is a growing preference for us to remove this ingredient. So we will. We currently have products without microbeads for those who would prefer them. We have begun removing microbeads from the rest of our toothpastes, and the majority of our product volume will be microbead-free within six months. We will complete our removal process by March of 2016.

If you're still nervous about it though, you can download an awesome app called Beat the Microbead that warns you of the microbeads in a product — all you have to do is scan a bar code. Still unconvinced? You can always make your own toothpaste from scratch.

More like this
How To Fight For Reproductive Rights, Based On How Much Time You Have
By Courtney Young
The Music Industry Continues To Fail Black Women
By Precious Adesina
Sarah Everard’s Killer Wayne Couzens Is Appealing His Whole-Life Sentence
By Sophie McEvoy
Starbucks' Summer Menu Includes A New Chocolate Cream Cold Brew
By Emma Garza
Get Even More From Bustle — Sign Up For The Newsletter