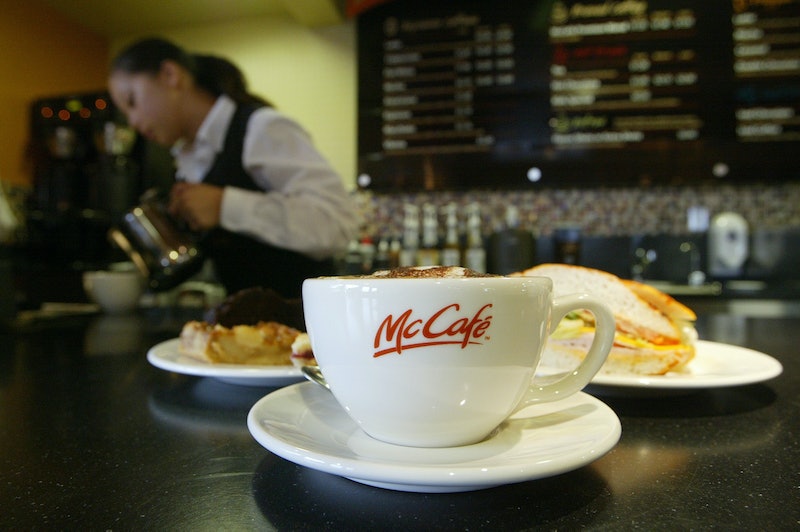 I can’t say that the House of the Red-Nosed One is my go-to place for a cup of joe — but McDonald’s is giving away free coffee from now through September 29, so obviously I’m going to change my java consumption habits for the next two weeks. Because free coffee.

There are limits to the promotion, of course; the freebie will only be available during the breakfast hours (usually about 7:30 to 10:30 AM), and only one small McCafé coffee will be provided to each customer. But hey, you know what they say about gift horses and expressly not looking them in a very particular facial feature — so I’m not complaining. According to TIME, the giveaway is a repeat performance of a promotion McDonald’s ran during the spring: Reads a statement from the fast food chain, “This event builds on McDonald’s first-ever Free Coffee Event launched in March, when the company gave away millions of cups of free coffee during the two-week period.” Multiple outlets have commented on the fact that the promotion is also likely intended to boost business — global sales were reportedly down 3.7 percent in August, the worst slump they've experienced since 2003.

Again, McDonald’s coffee definitely isn’t my favorite; even though their McCafé offerings compete relatively well with the specialty drinks on which Starbucks built its name, the actual coffee has just never impressed me that much. That said, though, their prices are usually tough to beat; the location near my apartment offers any size of straight coffee (no lattes or other fancy drinks) for a buck.

I’ll admit that I’m a little curious as to whether McDonald’s actively loses money on this deal: Coffee prices are rising right now, so the actual beans cost more than ever; you’ve also got to factor in things like the price of the cup, milk, sugar, and so on; and as Serious Eats points out, there an awful lot of costs hidden in the roasting of the beans in the first place. But at the same time, if Mickey D’s loses money on regular coffee, they probably make up for it with their Frappés and whatnot; as such, the hope for the free coffee promotion is that people will come in for the free java, and leave with, say, an Egg McMuffin or what have you as well.

Anyhoo, you’ve got until September 29 to grab your free cup of joe, so hurry up and get your caffeine fix while you can. It's not McBrunch, but it's A-OK by me!