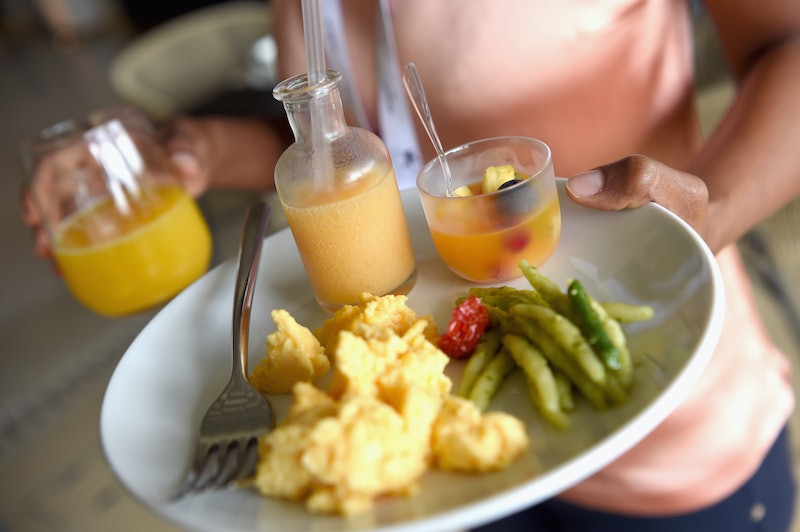 Ever move or travel to a different state and notice a serious lack of breakfast tacos? Or brunch? Or salted potatoes? Or whatever dish you and your peers thought was the bomb, but isn't nearly as popular in a different zip code? That's probably because taste varies (sometimes drastically) from state to state — hence my confusion when I, coming from Austin, discovered New Yorkers don't wrap bacon, eggs, cheese, and salsa in their tortillas every morning and call it breakfast. But what if we could pinpoint exactly what foods are popular in which states? Or even what meals are favored in different regions? So, you know, travelers and transplants can know what to get excited (or bummed out) about before they arrive at their destination.

Well, thanks to a few researchers at the University of Arizona, we now have a pretty good idea of what people are eating in different parts of the country. According to i09, Daniel Fried, Mihai Surdeanu, Stephen Kobourov, and Melanie Hingle examined what foods are popular in different states by studying — you guessed it — trends on Twitter. The researchers posted their findings in a working paper on arXiv, titled "Analyzing the Language of Food on Social Media," and also created a subsequent website chock full of fascinating, interactive graphs and maps detailing what everyone is eating from sea to shining sea.

So what exactly did they find, you ask? Let's start with the basics.

According to the researcher's working paper, these are the "most distinctive food words" recorded by state. In the paper, they note that the words were "filtered by a list containing 800 food related terms" and come from "food-related tweets." Take a look:

And to answer your question, no. Prunes probably aren't that popular in New York. Researchers mention that "Prune" is actually a restaurant — one that apparently has a great brunch.

Speaking of brunch, here's a map of the United States color-categorized according to which states prefer which meals. Naturally, the East Coast is all over #brunch (that's not to say the rest of the country doesn't indulge in early afternoon eggs and mimosas on a regular basis). Here's the map showing the "highest-weighted feature for the region prediction task" in the four US Census regions (from the paper):

The site takes these maps to the next level with a comparison feature. As in, you can type in two terms (like "tofu" and "chicken") and see which is more popular in each of the states. After a little searching, I came up with a few extremely necessary state-to-state food comparisons. Enjoy:

I wonder how that last one would have looked before the (semi)recent kale craze took hold.