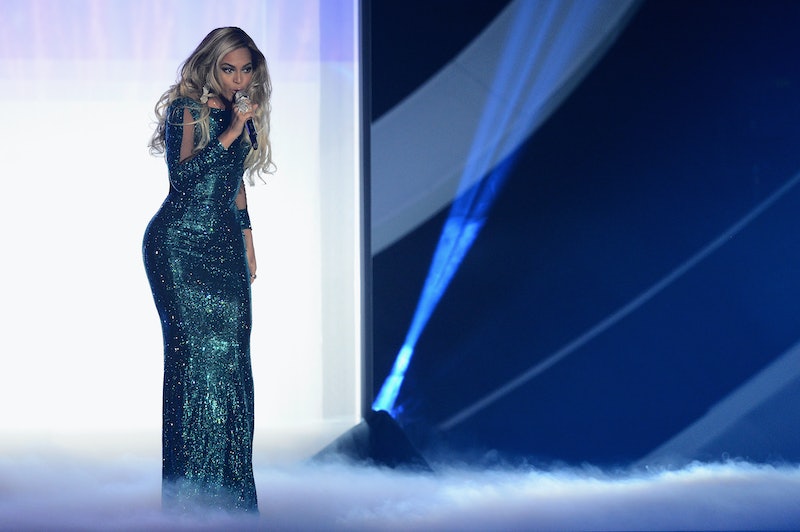 When you have a recipe for success, there's no real point in deviating from that pattern. Nevertheless, if you're Beyoncé, you can basically do whatever you want. Currently, whatever she wants appears to be the hopefully true rumors that Beyoncé and Jay Z will be releasing a joint album in 2015, but it's not as though Beyoncé needs help from Jay Z to give her career a boost. She's a certified goddess whose songs are addictive and the anthem to just about every life hurdle that may come our way. Even as she experiments with the boundaries of pop, Beyoncé's songs still remain popular, timeless, and — dare I say, predictable?

I'm not saying that predictability is a bad thing. How would we know we were listening to Beyoncé if she did a complete musical overhaul on every single album? What I'm saying is that there are some pretty common themes that run through her songs that you can pick up on if you listen to enough of them in a row. Naturally, I took it upon myself to study what those themes would be. Since Beyoncé has had five studio albums and a whole lot of singles, I narrowed my study down to just the songs that spent the longest amount of time on the Billboard Hot 100 to make it easier on all of us.

According to Billboard, here are the top ten Beyoncé songs that spent the most weeks on the Billboard Hot 100:

And here are the must-have elements for giving a Beyoncé song lasting power.

It probably went without saying that Beyoncé would sing a lot of emotional songs, but she seems to be pretty huge on letting us know exactly how she's feeling. From it being "such a funny thing for me to try to explain how I'm feeling" in "Crazy in Love" to her asking ladies "if you feel me" in "Me, Myself & I", there's a Beyoncé song for every mood no matter how inexplicable.

As a term of endearment, it's no surprise that Beyoncé's go-to word is the one that has been a common staple of every pop song since the dawn of time. In seven out of her ten Billboard hits, Beyoncé is cooing baby to whatever nameless male subject (ahem, Jay Z) that her song is in reference to. One song is even literally titled "Baby Boy", just in case you didn't get it the first time.

Considering how often we end up blasting Beyoncé in the club, then obviously a lot of her songs take place at a club or a party. In "Baby Boy" she's at a basement party imagining "everyone left but you and me". In "Check On It", she's out at a club with her ladies hoping that guy across the room will come over here and, well, check on it. In "Partition", she and Jay Z never even actually make it to the club. Whoops.

I mean, this just doesn't even need explaining. Everyone knows all the real fun happens after dark, am I right, Beyoncé? Even if it's something as innocuous as running home to have "Sweet Dreams" every night, Beyoncé makes it pretty clear in most of these songs that nighttime is her time to shine.

Apparently, Robin Thicke isn't the only one who knows you want it. Five out of the ten Beyoncé songs make some kind of reference either to her wanting it, him wanting it, or just wanting something in general. Then there are songs like "Crazy In Love", which just encapsulates want in general with lines like "your touch got me hoping you page me right now" and "I touch on you more and more every time".

Weirdly, half of the songs on the list made some kind of reference to eyes. In "Crazy in Love", Beyoncé is staring deep into Jay Z's eyes. In "Sweet Dreams", she's hoping she sees him every time she closes her eyes. In "Yoncé / Partition", she's wearing a Brooklyn brim with her eyes sitting low. Where did this wandering eye obsession come from? I have no idea. Then again, they are supposed to be windows to the soul.

Strangely enough, if she's not using baby as a term of endearment in a song then Beyoncé is using boy as a term of endearment. You'd think she'd upgrade to "my man" at some point. Aside from, obviously, "Baby Boy", she said, "boy, this is all for you" in "Yoncé / Partition" and she said "I wanna hear you say my name, boy" in "Naughty Girl".

Whether she's counting by seconds, by minutes, or by years, Beyoncé seems to really like keeping track of time in her songs. In "Irreplaceable", she tells her cheating ex not to "ever for a second get to thinking you're irreplaceable" while in "Yoncé / Partition" she informs us that it took her "45 minutes to get all dressed up". And let's not forget that she cried her tears for "three good years" in "Single Ladies (Put a Ring on It)". Beyoncé is a master time keeper.

Do I even need to explain this one? The only surprise inherent in this theme is that it didn't come up more often in her longest running hits. "Yoncé / Partition" was the one that was the most overtly sexual, but the moaning that made up an entire lyric in the first verse of "Baby Boy" definitely deserves a special mention here.

All the women who independent throw your hands up at me! Sadly, "Independent Women, Part 1" didn't make the top ten, but overall Beyoncé's songs tend to preach that while having a man is nice you as a woman don't necessarily need one. This lesson is carried through "Single Ladies (Put a Ring On It)", "Me, Myself & I", and even "Check On It" where Beyoncé is dictating the terms of that engagement.

This is a theme that's even less surprising than the theme of sex. Most of Beyoncé's songs are love songs, if they're not feminist anthems. "Halo" and "Sweet Dreams" are the best ones on this list of ten, with "Naughty Girl" earning a special mention for opening with "I love to love you baby".

Another common theme among Beyoncé's lyrics is the subject of dreaming. Aside from "Sweet Dreams", which is the obvious one, there's a line in "Me, Myself & I" about how silly it was of her "to dream of one day having your kids" and another line in "Baby Boy" about seeing the titular baby boy in her dreams.

More like this
Taylor Swift, Kerry Washington & More Speak Out On Uvalde Mass Shooting
By Jake Viswanath
I'm 42 & I've Never Had Sex. Is It Too Late?
By Sophia Benoit
Long Live Bennifer!
By Allie Jones
Why The '365 Days' Sex Scenes Are Good, Even If The Movies Aren’t
By Arya Roshanian
Get Even More From Bustle — Sign Up For The Newsletter