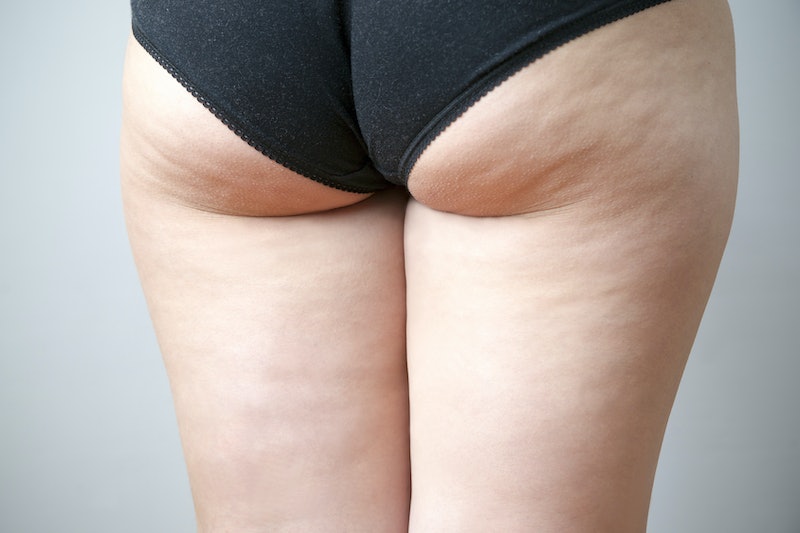 So...butts are kind of having a moment. And on the one hand, that sounds silly to say, given that butts have actually been around for a pretty long-ass time (pun very much intended), but with Nicki Minaj's Anaconda video and the fact that even Vogue knows that big butts are cool, they're now even more of a thing than they already were. Still, as Refinery29 points out, just because butts are "suddenly" cool to talk about doesn't mean women don't have all sorts of complicated feelings about their derrières.

To further examine the relationship women have with their backsides, Refinery29 put together a photo series of 30 un-photoshopped butts — big, small, round, flat, clothed, unclothed, and everything in between — and let their owners talk a little bit about how those butts made them feel. Though, unsurprisingly, most of the women who are willing to let their butts get the close-up treatment are pretty OK with their lower half, plenty still talk about difficulties in accepting that particular part of their anatomy, no matter its size or shape.

For some women, they thought their butts were too big; others thought they were too small — which probably says a lot about the way our culture programs women to find fault with their bodies no matter what those bodies may be. Some women talk about being teased or singled out as teens because of their butts (even doctors, as it turns out, can be insensitive jerks about butts). Others talk about coming to terms with the fact that they, like most women, have cellulite. But they all seem to have come to terms with this aspect of their anatomy, which is pretty awesome.

Overall, the project is really cool, made even better by the fact that the good folks who put it together understand what apparently eluded Vogue — that we should all be OK with our butts, even if they don't fit the mold for what's a "trendy" butt right now. "From cellulite, stretch marks, and age spots to the perkiest of young butts," they write, "we believe they all deserve to have an 'official era.' And, that era should be all the time."

Amen to that. Because who in the holy hell decided we should have "trends" about which type of bodies are acceptable and when? Bodies are awesome — all bodies, at all times. No more discussion needed.

To check out more of the lovely lady-bums and their owners opinions of them, head over to Refinery 29. And maybe also send your own butt a little love — because whatever size or shape it may be, it's awesome.

More like this
5 Crystals For Anxiety
By Megan McCarty
5 Crystals To Manifest Better Sleep
By Megan McCarty
Here's How To Practice Self-Love In Small Ways Every Day
By Mackenzie Sylvester
Tapping Mind/Body Power: Evia Brings Digital Hypnotherapy To Menopause
By Cassandra Seale
Get Even More From Bustle — Sign Up For The Newsletter