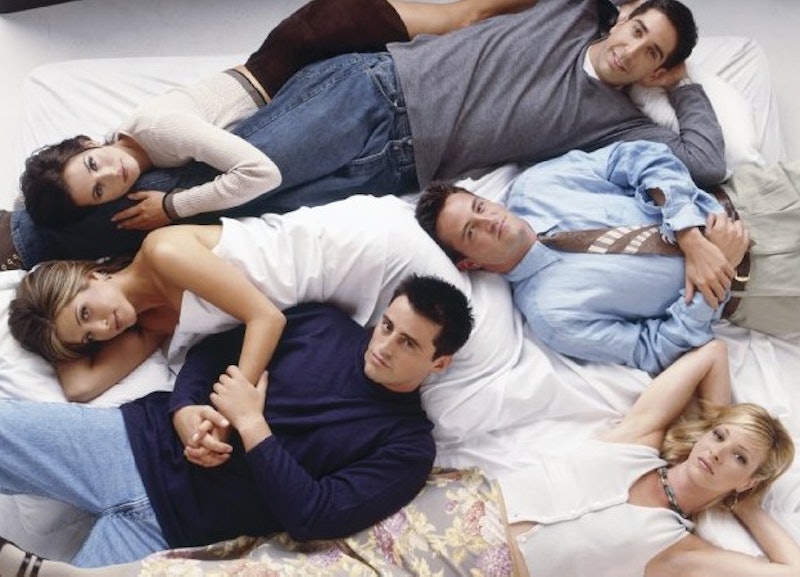 It's been 20 years since the cast of Friends graced our screens. Think about that for a second. It's been two decades since we were introduced to Ross, Rachel, Monica, Chandler, Phoebe and Joey at Central Perk; two decades since Phoebe wooed us with her guitar; two decades since we wondered how old eternally white-haired Gunther was, and watched his feeble attempts at pursuing Rachel. And now, after everything that could possibly be written about the beloved sitcom has been spewed and written and thrown out into the vortex of the internet, we have but one final question: What if Friends characters were types of underwear?

Bare with me. (Yes, that was a butt pun). It would be too easy to envision the cast of Friends as cups of coffee or types of breakfast food. It would be playing it safe to assign department stores to the likeness of each individual cast member. Underwear?! This is a challenge. So behold, your favorite cast members in underwear form. You're welcome.

Underwear: Boring, Basic, and bought in a 3-Pack

Intelligent, romantic and emotional, Ross places a great deal of thought into most aspects of his life — but not his underwear. He doesn't see the value in splurging for expensive drawers, they'll just be covered up in a pair of burgundy slacks and a button-down anyhow.

Rachel is a bit of a brat, she's fashion-forward and spoiled. To keep up with the variety of new trends she tries, she needs something that won't leave visible panty-lines, like a thong. She's also exceptionally trendy and a woman of the '90s, so high-wasited panties that might even stick up past her mom jeans are a classic Rachel move.

Underwear: Goofy, gag boxers he bought as a gift to himself

They probably have golf-balls or bananas on them, or perhaps a silk-screen image of the statue of David's naughty bits, but Chandler is always hiding a joke up his sleeve, or in this case, up his pants.

Underwear: Organic hemp panties — when she remembers to wear them

Phoebe is a new-age waif who is as sweet as cherry pie. Her love of her friends, animals and the environment is as endearing as her attempts at landing singing gigs outside of Central Perk. Her underwear of choice is cruelty-free and probably a bit itchy, but she's committed to helping, whatever the cause may be.

Monica's clothing is as meticulously curated as the artwork and dishes hung in her Manhattan apartment. Everything is planned, and everything is perfect — just like her no-nonsense panties, which serve as a vehicle for clothing, and nothing more. However, post-Chandler hook-up Monica embraces her sexual side a bit more, trading in flesh-colored boy shorts for black panties — they might even be edged with lace.

Joey neither remembers to put on underwear in the morning, nor needs to. His life consists of running from audition to audition, and picking up women with a casual, "How you doin'?" and he simply has no time or need for the likes of underwear.