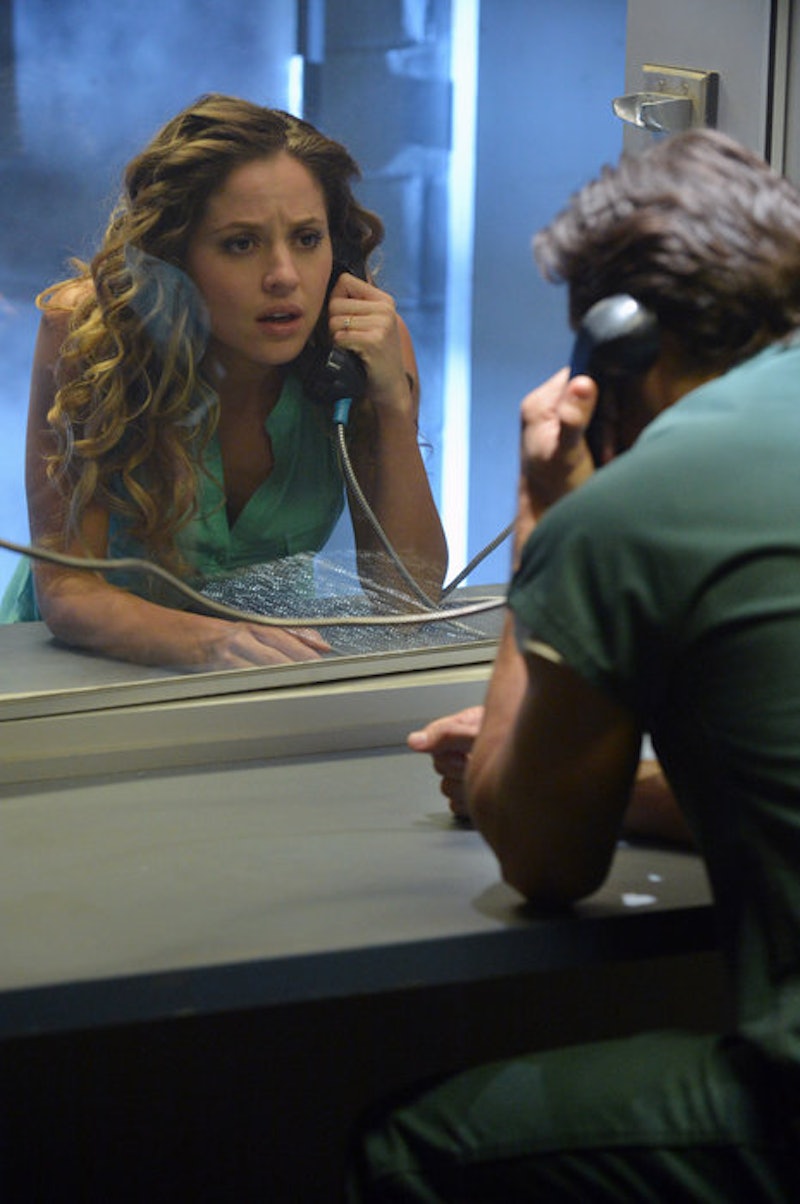 I don't pretend to understand why ABC's Revenge does half of the things it does. Especially now that the new trailer for Revenge Season 4 confirms that the series will follow Victoria Grayson's revengenda. I mean, this is the show that made us believe for THREE SEASONS that the main reason behind Emily Thorne's sometimes-questionable behavior, David Clarke, was dead. Only to bring him back, as alive as ever, in the Season 3 finale. Now, E! Online reveals that another character is coming back from the dead — Amanda Clarke. Revenge Season 4 will bring in a stripper connected to Amanda Clarke, the fake one, of course and she'll reveal details about her past. But why the heck does that matter?

According to E!'s spoiler, Revenge fans will learn "a bit more about Amanda's past" from a stripper friend named Crystal Chandelier. Yes, that's her name on the show. Don't get me wrong, I'm all for learning more about the dearly departed Amanda Clarke. But, considering everything else that's going to be happening when Season 4 returns on Sept. 28 — like Conrad's potential life/death, David Clarke's return, and Victoria's revenge plot for starters — why in the world do we need to learn more about Amanda? This character was killed off the series at the end of Season 2, an entire season has gone by without Amanda Clarke and we've all started to move on, including her baby-daddy Jack Porter. What could we possibly need to know about her?

We've already learned how Amanda ended up meeting Emily in the first place and their decision to swap identities for life early on on Revenge. What is there that her friend from her former place of employment need to add to this story? Unless the David Clarke conspiracy theory mill runs all the way back to Amanda and Emily meeting each other in juvie. Or maybe, just maybe, David Clarke frequented Amanda's place of employment where he worked with her to keep an eye on his daughter and Crystal knew a thing or two about it.

Revenge is going to get a major reboot with this season with David being back from the dead and the focus shifting onto Victoria. I know there's no possible way that this man didn't figure out a secretive method of keeping track of his daughter over the years. And Amanda's past could hold the answer to that particular question. If not, Crystal Chandelier is just going to be a colorful addition to the cast like Margot was in Season 3. I just hope that Revenge sticks to answering all of the questions it's posing and doesn't get too carried away with this storyline unless it bears heavily on the impending David and Emily reunion.

More like this
Oops! The 'Stranger Things' Monopoly Game Has Spoilers For Season 4
By Alyssa Lapid
Twitter Got *Very* Emotional Over 'The Split’s “Perfect” Finale
By Sam Ramsden
'This Is Us' Included A Heartbreaking Easter Egg About Jack's Death
By Grace Wehniainen
Twitter Has Very Mixed Feelings About The New 'American Idol' Winner
By Jake Viswanath
Get Even More From Bustle — Sign Up For The Newsletter