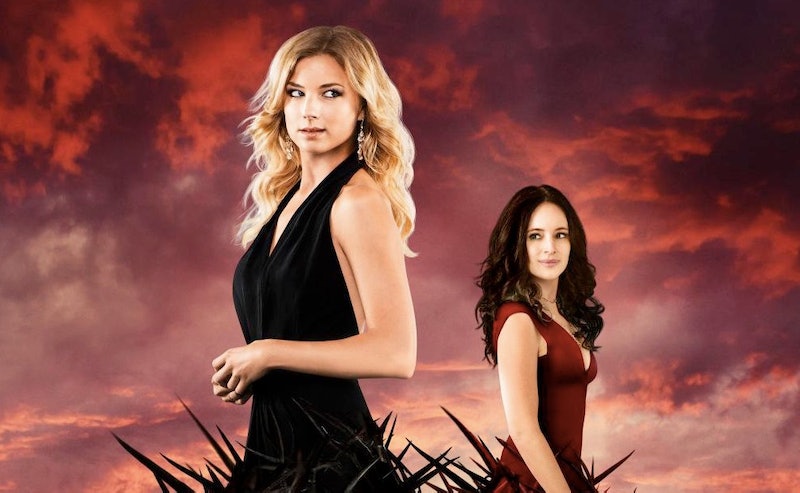 The upcoming premiere of Season 4 of Revenge has left a lot of people wondering where the plot will go now that Emily Thorne seems to completed her revengenda by destroying the lives of all those who destroyed hers. Initially, I assumed Emily's new agenda would be to seek revenge on Victoria — again — for killing Aiden, but the new extended trailer for Season 4 shows that Emily might not be the one looking for revenge this season. The person who wants revenge is Victoria Grayson. And it sounds like she is coming for blood.

In the new trailer for the ABC show — which returns on September 28 — Victoria proves that she might be down, but she is certainly not out. She says that ever since she met Emily, she knew there was something about her. For three years, since Emily returned to The Hamptons, Emily has ruined Victoria's life in multiple ways. As Victoria says in the trailer, "When everything you love has been stolen from you, someone has to pay. Emily Thorne, I'm coming for you," (dramatic Revenge music). So what does it mean for the show now Victoria is declaring war on Emily?

Victoria will reveal who Emily is

Or maybe she won't. Victoria is so sneaky that I wouldn't be surprised if she kept Emily's secret to herself to have an advantage over her. But just because Victoria doesn't reveal Emily's identity doesn't mean Em is safe from a new arrival in The Hamptons.

Victoria could use David Clarke against Emily

I feel like it would be too easy if David Clarke returns to The Hamptons and him and Emily become a happy family just like that. Revenge is known for turning family members against family members, and if David Clarke doesn't even know that Emily is his daughter, he could easily fall under Victoria's spell and be used to hurt Emily.

I know. Dramatic. But isn't that what this show is about? Victoria hates Emily, she blames her for all the bad things that have happened over the past three years, so I don't see Victoria letting Emily get away with a slap on the wrist (she also just murdered Aiden, so she's definitely capable of it).

Something that will really make it a battle of the The Hamptons this season will be the fact that both women have things to seek revenge for. No longer will it be a one-sided fight, the two will definitely be going at it as Emily looks to avenge Aiden's sudden death and Victoria wants to make Emily pay for, well everything she has done to the Grayson family.

Jack will definitely get caught in the crossfire

From the very beginning it felt like producers were just waiting to put Jack and Emily together, and now that Aiden is dead and Daniel is no where near an eligible suitor for Emily, I wouldn't be surprised if Victoria used Jack to hurt Emily.