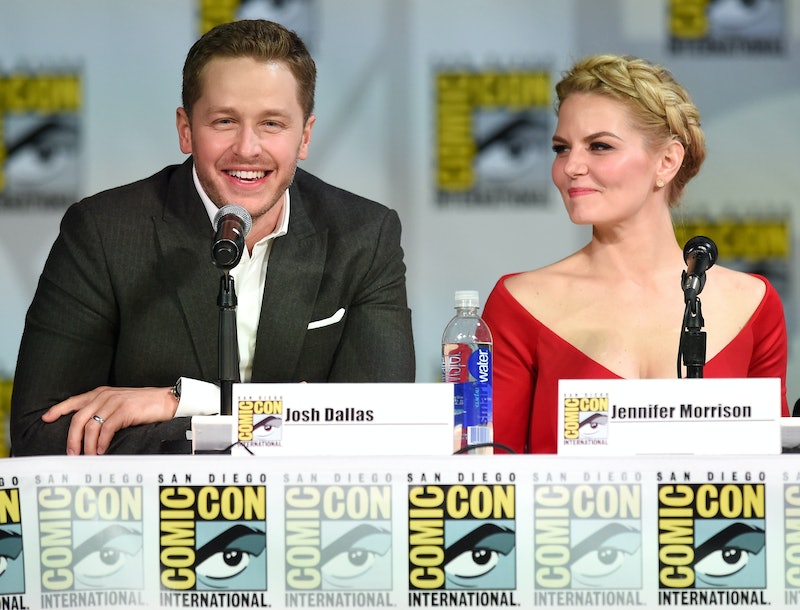 Just because Once Upon a Time features fairytale characters, that doesn’t mean every relationship on the series will have that “happily ever after” fairytale ending. Let's be honest, if they did, I’m willing to guess that ABC would be down a series for lack of viewers. In case you’ve been living under a rock, uneasy times are coming for Storybrooke residents now that OUAT Season 4 is adding Frozen characters. With Elsa in town, you'd think that David, aka Prince Charming, and Mary Margaret’s relationship would be among the many that are affected by her visit. But I actually think that the Charmings’ experience as parents will be what causes trouble for them this season, not Arendelle's ice queen.

To recap the season finale: the Charmings’ storyline ended with the presentation of their newborn son, Prince Neal, named after the hero who should have been his brother-in-law (awkward). After rescuing baby Neal from the kidnapper that was Zelena, Mary Margaret’s eyes were finally ablaze with excitement again. But in the final episodes, we were also introduced to a much-less-enthused Prince Charming, whose courage was abducted by the Wicked Witch. If you recall, David showed his vulnerable side last season, having recurring nightmares about being a bad father. Vulnerability + Anxiety over leaving Emma = Bye-bye Courage.

With Charming’s courage back, one thing is for sure: he is going to do everything in his power to be a damn good father to Neal. He will be there for Neal in every way that he couldn’t be for Emma. I’m only afraid of what this will mean for Emma. I predict that Charming will spend the majority of his energy on Prince Neal. Now, you might think that my speculation on the subject should be the other way around since it was Mary Margaret’s wish to have another baby in the first place, but hear me out.

Peter Pan’s poor excuse for an island exposed Emma for what she truly is: an orphan who hasn’t quite forgiven her parents for separating their family. After Neverland, OUAT left Mary Margaret in the process of redeeming herself as a mother to Emma. Her mission was interrupted by Pan’s curse. And a trip back to the Enchanted Forest. And a pregnancy. And Zelena trying to steal her baby and whatnot. With Zelena finally gone, Mary Margaret can now re-focus her attention on Emma.

I don’t mean to say that Snow won’t spend a good chunk of her time with her son. (Especially considering that I’m mostly looking forward to some Emma/Hook alone time.) But it’s more than possible that she will be more understanding of Emma’s needs than David will. And she isn't gonna be happy if she thinks her hubby is neglecting their firstborn.

Here’s where the problem sets in: with two kids who are about 30 years apart, who will get priority in the Charming family? My guess is as good as yours, but it can’t mean anything good for David and Mary Margaret. With a situation as magically unique as this one, they might find themselves butting heads over how to meet each of their children's needs. Trouble in paradise on OUAT. What a surprise.