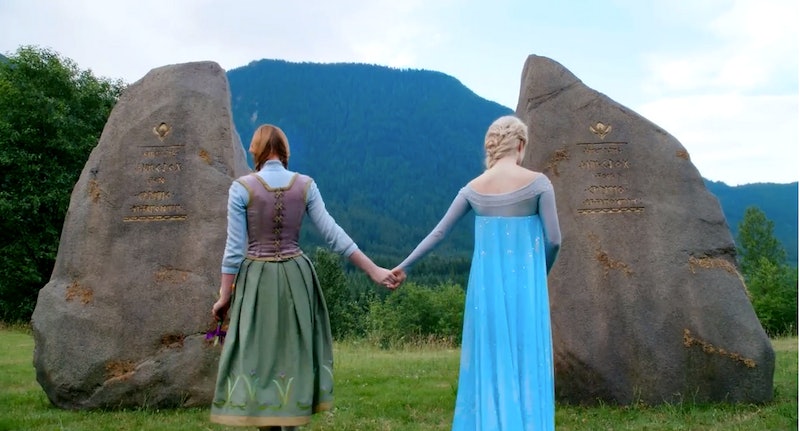 No one's ready to stop talking about the Once Upon A Time collaboration with Disney's Frozen — including the ABC series' showrunner, Adam Horowitz. The past few months have been full of Frozen spoilers from OUAT's Anna and Kristoff wedding to the title of the Season 4 premiere, "A Tale of Two Sisters." And on Sept. 13, Horowitz tweeted the title to Season 4's seventh episode and it's yet another cold, hard bombshell. Once Upon A Time Season 4's seventh episode is called "The Snow Queen," which could mean any number of things — the biggest of which being an explanation for Elizabeth Mitchell's mysterious casting.

Now, this Horowitz-provided spoiler came with no explanation whatsoever, unless you count the strange-looking key that appears above the script as an explanation. So, naturally, my imagination is running wild. This episode could simply mean that this is when Elsa will try to rise to her fullest potential during her arc on OUAT. But that would just be too simple, right? Especially when we consider this TVLine casting spoiler for "The Snow Queen," the site revealed that OUAT is guest-casting a "'strong, intelligent and beautiful' middle sister of three, a blue-eyed blonde in her late 20s/early 30s who 'always puts her sisters first.'" So, what the heck is waiting for OUAT and Frozen fans alike when Season 4's seventh episode airs?

I've got a few theories but first, here's Horowitz's tweet:

Now, here are some of the possibilities for what "The Snow Queen" might bring to the table. First, there's the obvious theory that Elizabeth Mitchell will be playing Elsa and Anna's mother, but unlike their mother in the Disney film, Mitchell's character will actually be the Snow Queen. Which would sufficiently explain Elsa's magical powers. (Was anyone satisfied with Disney's explanation that Elsa was just born that way? C'mon, Disney.) Considering we'll be introduced to Elsa in the Season 4 premiere and we know that she isn't the queen because she's been locked up for a good long time, it doesn't seem likely that this episode's title could refer to her. Unless, like I mentioned earlier, she comes to full-power in the seventh episode.

Another possibility for this episode is that fans will get a huge flashback scene and OUAT will reveal that Anna and Elsa once had another sister, a middle-sister, who died. How? Well, I could see that explaining why Elsa ended up trapped in a vase in Rumpelstiltskin's basement. Or, it could have to do with a flashback of the Snow Queen herself, much like the flashbacks we saw in Season 3 from Zelena's tragic past. Perhaps we'll see the Snow Queen as a teenager, which would absolutely make sense with the guest-casting announcement.

Finally, this episode could take us back to the past to when Elsa became Queen of Arendelle following her parents' deaths. Though it'd be far less interesting than the other two options — death and/or the introduction of Mitchell's mysterious character is a lot better than watching Elsa struggle with ruling Arendelle. I'm sorry, it just is. And the last thing OUAT should do is take the boring and easy way out with Frozen. I mean, they've already gone through all of this trouble, why not make sure it's a memorable experience that fans won't want to let go of.