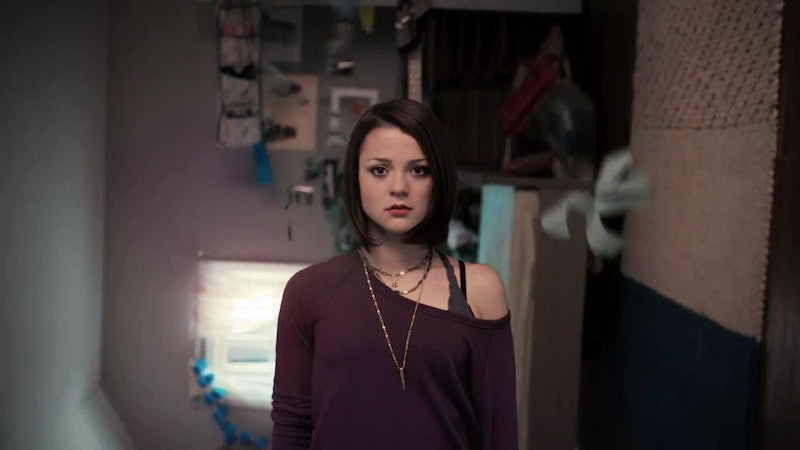 After last week's absolutely jaw-dropping Finding Carter Season 1 finale, I'm not sure how I can possibly hold out for the show's second season in 2015. For those of you who missed it, Finding Carter went totally full-circle. Lori came back and finally got some face time with Carter (under the guise of being her "therapist"), which culminated in Carter telling Lori that she should have never kidnapped her in the first place. Instead of backing off and leaving Carter and her "real" family alone, Lori did the exact opposite of what a sane person would do: she drugged and kidnapped Carter, leaving Carter's mother Elizabeth in the exact same spot she was in 13 years earlier. Finding Carter's story is so twisted that some fans are asking whether Finding Carter is based on any real-life stories — because sometimes the truth is harder to make up than fiction, right?

Finding Carter isn't based on any one specific true story, but it would be hard for the writers of Finding Carter not to be inspired by the more recent stories of children who were returned to their biological parents after years of living with their kidnappers. The sad truth is, Finding Carter's story is far more optimistic than most of the stories about kidnapped children. Jaycee Lee Dugard, for example, was returned to her family after 18 years in captivity, during which time she allegedly suffered a great deal of abuse at the hands of her captors. However, there is one true story that bears a strong resemblance to the plot of Finding Carter: The story of Netty Nance, a.k.a. Carlina White.

Mirror reports her story, which begins in 1987 when a woman named Ann Pettway stole 19-day-old Carlina White out of the maternity ward of Harlem Hospital in New York City. The woman renamed White Nejdra "Netty" Nance and raised Nance as her own. As Nance got older, she started to question why she didn't resemble her mother. When she became pregnant and needed a birth certificate to register for pre-natal care, she was told it was a forgery. Though Pettway told Nance that she was given up for adoption by a drug-addicted mother, something didn't sit with Nance, and she began to look for other reasons why she and the woman she thought was her mother were not really related. In 2010, Nance found her own photo on the website of the Center For Missing and Exploited Children — and everything clicked into place.

There are certain things unique about the Nance case that makes Finding Carter its clear parallel. In a New York Magazine interview, Nance recalls that Pettway was always considered the "cool mom" by Nance's friends. On Finding Carter, Lori is the quintessential cool mom, which becomes part of the reason why Carter's own kidnapping is so hard for her to accept — Lori seemed so genuinely nice, fun, and friendly. A major difference between the story on Finding Carter and the real story of Nance and Pettyway is that, while Carter was given a mostly stable life with Lori alone, Nance and her mother did not get along so swimmingly — instead, Nance spent most of her time with Pettyway's extended family, who had no idea of Pettyway's original crime.

Though we don't yet know the real reason that caused Lori to kidnap Carter, Pettyway's reason gives us a glimpse into why someone might kidnap a child and raise her as their own. According to Pettway's lawyers at her kidnapping trial, as reported by The Daily Beast, Pettway was severely depressed when she kidnapped Nance, and her desire for a child stemmed from the several miscarriages she had endured earlier in her life. Her defense presented the idea that while a healthy person might be able to see other options of raising a child, Pettway's depression clouded her judgement, allowing her to kidnap a child without feeling any empathy for the parents or remorse for her actions. A fictionalized film version of the story was created for Lifetime, titled Abducted: The Carlina White Story.

Finding Carter may not be directly based on Pettway's crime, but it does show that sometimes fiction isn't all that far away from reality.