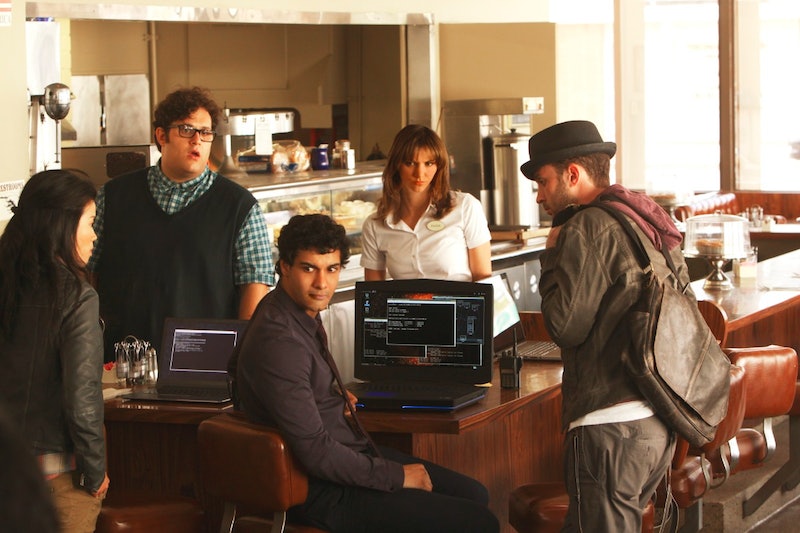 Watch out, The Big Bang Theory — there is a new group of geniuses on CBS, and they're doing more than cracking periodic table jokes. The new CBS series Scorpion premieres on Monday, and it may make you want to take up hacking as a side job. The show stars Elyse Gabel as Walter O'Brien, a skilled computer hacker with an IQ higher than Albert Einstein's (and, from the look of the trailer, an ego that definitely surpasses the latter's). O'Brien is the leader of his motley crew of geniuses, which TVLine reports as including a behaviorist, a "human calculator," and a mechanics expert. The title, Scorpion, refers to the name of O'Brien's super genius collective. And, get this: It's kind of a true story.

Scorpion is based on the life of the real-life Walter O'Brien, a self-proclaimed genius and computer hacker. According to The Irish Times, the title Scorpion originally comes from O'Brien's hacking name. The Irish Times explains that it's not the only part of Scorpion that is based in fact. The trailer for the show features a flashback of a Homeland Security team coming to a young O'Brien's home after O'Brien hacked into the NASA computer system. According to the Ireland native O'Brien, that's a true story, though it was a little less dramatic than how it is pictured in the trailer — probably because O'Brien is, of all things, a genius. Once greeted by the security officials, O'Brien allegedly pulled out an extradition contract, which would absolve O'Brien of any wrongdoing if he told NASA where the holes in their security were. (So... what were you doing at 13?) You can watch the fictionalized scene unfold below.

Today, O'Brien, now 39, runs an international security company, Scorpion Computer Services. His company was one of the tech groups that assisted in the capture of the suspects of the Boston marathon bombing in 2013. According to Fox, Scorpion Computer Services helped break down hundreds of hours worth of surveillance footage in order to capture images of the suspects.

That's the kind of thing that the fictional Walter O'Brien will be doing when Scorpion starts up this fall. The procedural will show O'Brien and his team solving crimes with little more than access to computers and a hefty dose of brain power. The pilot will show O'Brien and his gang stop a major aircraft disaster, and given that's only the pilot, we can expect far more drama where that came from. The real O'Brien may not be a household name — yet — but his fictionalized version just might become one sooner than he could have ever imagined.