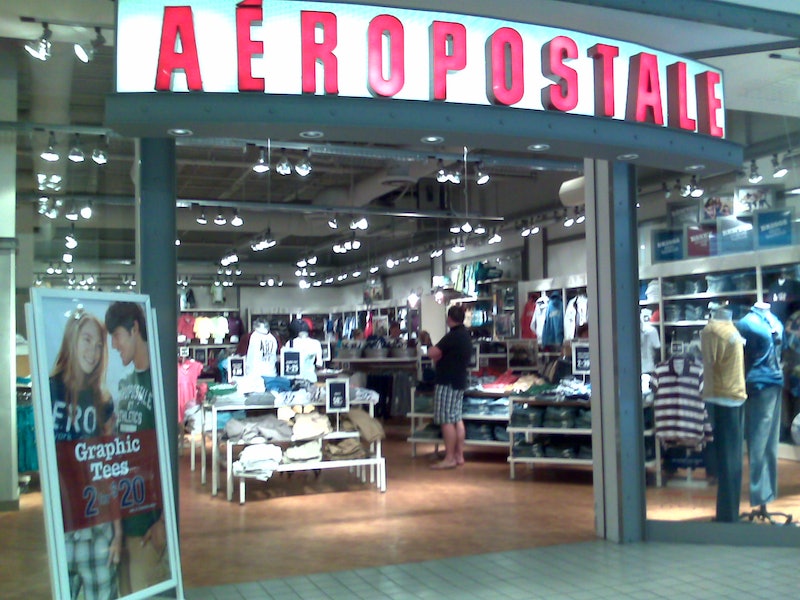 Today, we might long for Chanel espadrilles and J. Crew's entire September catalog, but back in high school? Fashion was all about a different set of labels: tight Abercrombie jeans, American Eagle swimsuits, and anything with an Aeropostale logo splashed across the front (or back, or side). These were the brands that trendy teens wore, and we all wanted them.

Teens today aren't feeling those stores anymore, despite that these retailers — known as the 3As — are specifically targeting them. The boom of fast fashion, epitomized in stores like Forever 21 and Zara, has caused teens to are abandon the classic mall destinations in favor of stores that are big and cheap, jam-packed with trends — and 20-somethings.

All three teen-centric retailers have reported sharp drops in sales and stock value. American Eagle's shares for the fall are projected to be at their lowest level in a year and a half; Aeropostale has reported that sales fell 15 percent last quarter, and Abercrombie reported a 10 percent drop in same-store sales. In glaring contrast, H&M's US sales rose 10 percent in the first half of 2013, Zara's sales more than tripled between 2007 and 2012, and Forever 21's sales rose 82 percent during the same period. The cheap basics, deep discounts, and nearly unlimited options of these fast fashion stores have set a standard that the 3As, with their higher-priced merchandise and narrower clientele base, simply can't match.

Plus, teens just aren't making much money these days. They're finding it harder to get jobs — and when they do snag a paid position, they're beginning to direct their money toward electronics, not clothing, according to Reuters. Before the recession, 40 percent of 16 to 19-year olds had summer jobs, but today, fewer than a third are getting a paycheck, the Wall Street Journal reports. And financially struggling parents means less of an allowance to spend on logoed tees and an Auntie Annie's pretzel.

Perhaps this trend speaks to a larger trend — the blurring, whether subconscious or deliberate, of lines between age groups. Teens don't want to look like teens anymore, and are turning away from stores that literally brand them as such. (Nothing says high school like an American Eagle hoodie.) They want the same clothing that they see on older siblings, off-duty models, and celebrities with massive shopping budgets. In a world where almost half of U.S. teens own iPhones, it makes sense that they all want to look a little older.