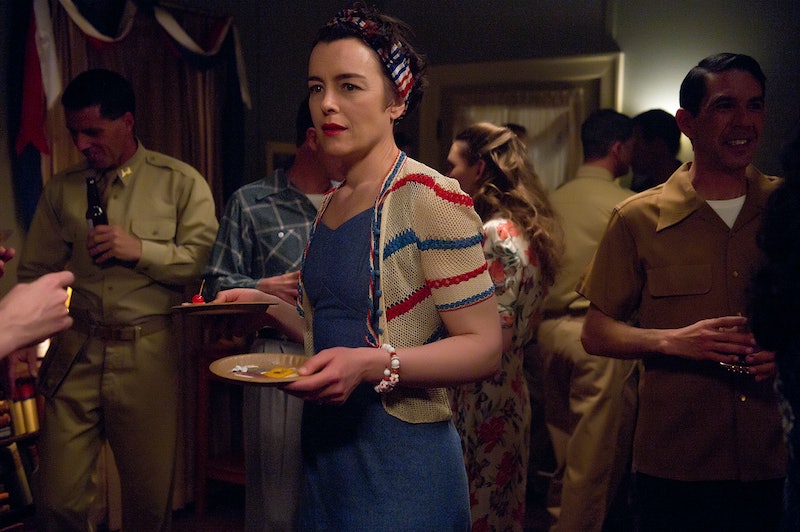 Cable TV shows have gotten a bad rap recently for thinking of their female characters as accessories, afterthoughts, or props to either help or get in the way of the male characters. And yet some really well rounded female characters can be found where you wouldn't expect them: on Manhattan, a show about the development of the atomic bomb in a hush-hush Los Alamos lab (which was kind of a boys' club). Just in time for Manhattan to air its Season 1 finale on WGN, I spoke with creator Sam Shaw about the show's approach to its female characters.

"Honestly, on an emotional level and on an intellectual level, I was if anything more interested by the experiences of the women in this place," he says. "I've read stories before about what it was like to be Robert Oppenheimer, but the situation of the women at Los Alamos is a story that I hadn't really read before or heard before."

Shaw notes that, in Manhattan, much of this comes through the character of Liza Winter, played by Olivia Williams. In the show, Winter, a botanist, moves to Los Alamos so her husband can be one of the lead scientists on the secret bomb project.

"In many ways, she's the emotional center of the story," he says. "I was so interested by the question of: What is it like to be someone who has your own career, your own rich intellectual life — and is a scientist in your own right — and come to this place where, because you're on the outside of a secret, you suddenly lose those parts of your identity and you can't communicate with your partner. That was really interesting to me."

Williams gives one of Manhattan's many fantastic performances on the show — something that's no great surprise to Shaw. "Olivia was a special case because I conceived and wrote this role for her," he says. "I think she just projects such incredible intelligence, wit, and strength, but there's also a complicated vulnerability to her, too."

He also proudly reports that his wife, who is a writer on the show, submitted each of the first-season scripts to the Bechdel Test, and 12 out of 13 passed. "I was really shocked to learn that one of our episodes didn’t pass the Bechdel Test, but, given how bad Hollywood’s scorecard is, I felt pretty good about it overall," he says. "Certainly, our intention is to be 13 for 13 in future seasons."

And The Real Los Alamos

Shaw notes that the goal of Manhattan isn't to focus on the history of the development of the bomb — which is well documented — but to really show what everyday life was like in Los Alamos. It seems like that would be harder to research than the straight facts of history, but Shaw says he was lucky. "There’s an incredible record of memoirs and letters that people kept," he says. "Nearly everybody who lived at Los Alamos during the wartime period and afterward, even those who didn’t know what the secret purpose of town was — the wives who didn’t know that their husbands were building an atomic bomb, or schoolteachers, or grocers — everybody had a sense that something important and extraordinary was happening."

This includes something that may be surprising to most people: A record of the Los Alamos party scene. "For all of the incredibly hard work that was involved in building this bomb — and the great moral pressures that were bearing down on these physicists — it also was kind of like a summer camp for geniuses," he says. "The average age in this place was 25 or 27. It was an incredibly young town. There was this really vibrant culture of partying in this place. People write about these raucous dorm parties where people would be drinking pure lab alcohol out of laboratory equipment. They found these amazing ways to keep themselves entertained."

He also spoke a bit about someone named George Kistiakowsky, "an explosives expert who would detonate big swaths of the hillside to take down trees so they could create ski runs" who was integral to the scene of "geniuses — the greatest minds in the world who were in the process of developing a weapon that was either going to save humankind or destroy it — slaloming shirtless down these ski slopes on these bright, sunny days in the middle of winter."

Well, I certainly hope that makes it into Manhattan Season 2.