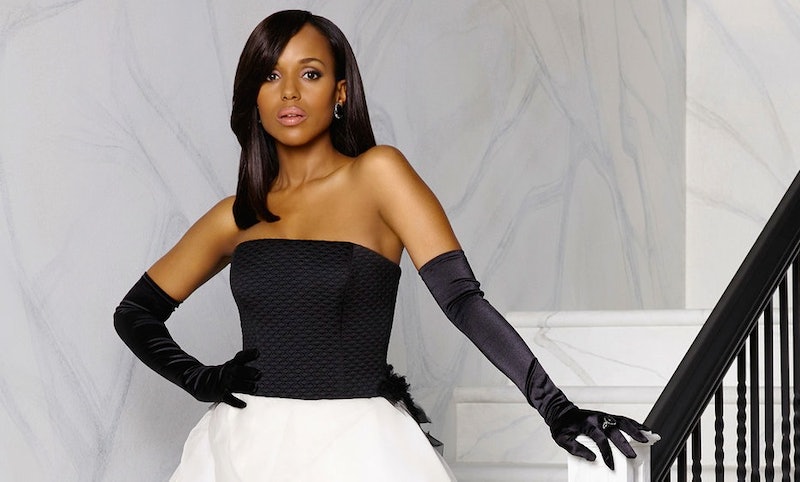 Read the very first line of the New York Times article "Wrought in Their Creator’s Image: Viola Davis Plays Shonda Rhimes’s Latest Tough Heroine," and you're going to have a bad taste in your mouth. After all, it states that Rhimes, executive producer of this season's How To Get Away With Murder, should call her autobiography "How to Get Away with Being an Angry Black Woman." The first half of the article then goes on to imply that the Angry Black Woman stereotype is something that all of Rhimes' characters have in common, a stance that more than diminishes the creator's contributions staging a television takeover. (Rhimes can boast that her hard work has paid off in the form of having Thursdays entirely devoted to a block of her shows aired one right after another: Grey's Anatomy, Scandal, and How to Get Away with Murder.) The New York Times article was meant to praise Viola Davis' performance in How to Get Away with Murder, but what it really did was prove that some stereotypes die hard.

The thing is, the article makes the argument that Rhimes is building and claiming a new stereotype for black female characters that is an improvement over the "sassy black woman" stereotype or the "too good for this earth ethnic character" that has been so popular on television in the past. It points to the tough-talking, thick-skinned, intimidating personas of Olivia Pope, Dr. Miranda Bailey, and Annalise Keating and goes on to discuss how these "angry black women" have transcended the stereotype and helped diversity under the strong guiding hand of a showrunner like Rhimes. Naturally, when Rhimes caught wind of the New York Times article, she took to Twitter in order to rebuff their claims that she or her characters were angry black women.

Because in making that comparison, the article completely misses the point of all three characters it discusses. To summarize Olivia, Miranda, and Annalise as angry black women to make a point is to completely debase them as characters. In fact, it’s outright offensive. Take Olivia Pope for example. Olivia Pope isn’t angry. If she’s angry, she has good reason to be. Her default mood, to be honest, is more stoic than anything and multiple characters complain about how emotionally distant Olivia is when she’s wrapped up in her own head. The article points to her “Earn Me” rant as the pinnacle of angry black woman meltdowns, completely ignoring the very justifiable reasons Olivia had for that break down. Having an affair with a guy like Fitz would make anyone angry all the time.

It seems like that there are only two settings a confident black female character can have on television. She is either sassy or she is angry. Apparently, Rhimes has built an entire career out of delivering those angry black characters to us. However, the fact that the very title of the article implies that it is only her black female characters that are "wrought in [Rhimes'] image" just goes to show the unfair lens through which these characters are being viewed. After all, Dr. Miranda Bailey is not the main character of Grey's Anatomy; Meredith Grey is. Why isn't she, as the female lead, the one supposedly wrought in Rhimes' image? Why isn't Christina Yang the one supposedly wrought in Rhimes' image? Why compare Rhimes to her supposedly angry black women characters at all?

The article completely fails to take its own argument and ask the important question, which in this case is why is it that when a black female character on television is flawed, is blunt, is even rude, does she immediately qualify for the "angry black woman" label? Yvette Nicole Brown, who plays Shirley Bennett on the Dan Harmon show Community, gave an interview with The Daily Beast in 2012 about Shirley's definition as a sassy black woman and one quote applies to this situation perfectly: "Every woman on the planet has sass and smart-ass qualities in them, but it seems sometimes only black women are defined by it."

And that is the problem here with the New York Times article. Suddenly, Dr. Miranda Bailey, Olivia Pope, and Annalise Keating are defined by their rage and the intimidating effect they have on others rather than anything else. Suddenly, they are narrowed into the kind of stereotypical box that Rhimes has worked so hard to write them to transcend. Suddenly, they are all three the exact same thing — an angry black woman — despite the three of them not having very much in common at all. The fact that this kind of labeling is still happening even now is really disappointing. Overall, the New York Times article was very positive in discussing how the characters are more than just that label, but they could have done so much more.

Meredith Grey and Abby Whelan have both had angry, wrathful moments of their own, but apparently that's not enough to devolve them into the "angry woman" label. Apparently that title only falls to black women, whether they are the star of their Rhimes show or not. At the end of the day, "Wrought In Her Image" is correct in saying that Rhimes has "embraced the trite but persistent caricature of the Angry Black Woman, recast it in her own image and made it enviable," but that caricature is not at all what Olivia, what Miranda, or what Annalise are all about and probably not what they were based on to begin with.