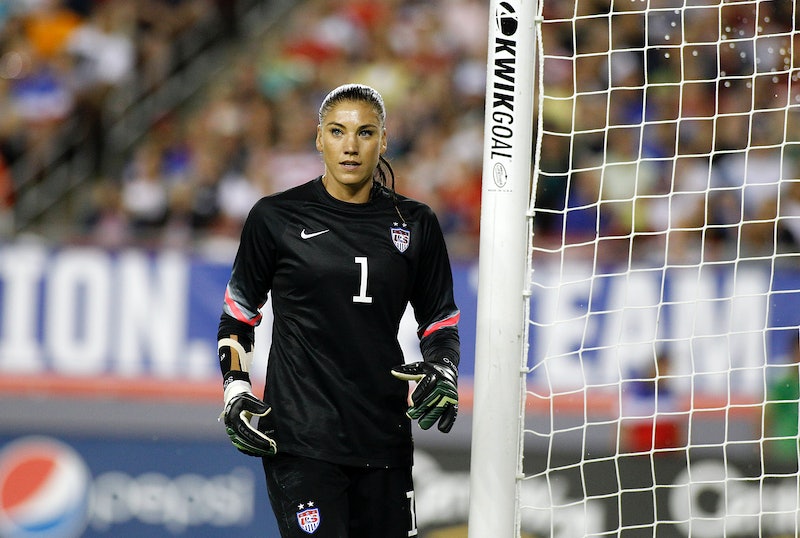 Last summer, a prominent U.S. athlete was charged with two counts of domestic violence assault in the fourth degree. The soccer player’s sister and teenage nephew were struck several times, so hard that they were left with visible injuries. But, until now, the athlete continues to be paid to kick around a soccer ball, with no kicking up a fuss— even though the abuse case has been known for a while. Why? Because the athlete is a woman. Women’s soccer star Hope Solo is accused of domestic abuse, and no one cares.

Keep in mind, this is a month in which Ray Rice and Adrian Peterson, among other high-profile sports stars, have faced professional and personal condemnation, in addition to legal charges, for abusing others — and rightly so. The only difference? Hope is female. And by discriminating between alleged domestic violence perpetrators by gender, we're doing a disservice to all domestic violence survivors, male and female.

Solo is undoubtedly a star. When the U.S. Women's Soccer Team won Olympic gold medals in 2008 and 2012, Solo was there, being the phenomenal starting goalie that she is. Just yesterday, she managed to push her U.S. shutout record to 73 games, when the team beat Mexico 4-0. She’s even been on Dancing with the Stars. Twice.

You know what else she’s allegedly done? Been put in jail, without bail, for apparently hitting her sister and 17-year-old nephew in June of last year. In fact, she’s currently waiting to be tried for two counts of misdemeanor domestic violence. The court date is set for November.

Somehow, though, this has impacted her... not at all. According to the Washington Post, Solo’s still being paid to keep playing, and she’s even kept her endorsement deals with Nike and Gatorade. Not a peep has been made about the fact that U.S. Women's Soccer Team has given her zero punishment (and has, in fact, honored her record instead).

Neil Buethe, U.S. Soccer director of communications, told USA Today that the team was "aware that Hope is handling a personal situation at the moment.” Then he added:

At the same time, she has an opportunity to set a significant record that speaks to her hard work and dedication over the years with the National Team. While considering all factors involved, we believe that we should recognize that in the proper way.

In other words: who cares? She's making us look good.

Except, she's not. The world was rightfully disgusted by Ray Rice, and it was very much thanks to this outside pressure that the athlete got indefinitely suspended (and this hasn't stopped women's groups from demanding that Commissioner Roger Goodell leave the NFL for good.) There was also outrage over Adrian Peterson and Greg Hardy, both of whom were disciplined.

Most recently, Jonathan Dwyer got put on the Cardinals reserve/non-football illness list. So why is no one disgusted that Hope Solo, an athlete likewise accused of domestic abuse, is being flaunted instead of punished?

When the issue was brought up on an MSNBC Morning Joe panel this week, panelist Katty Kay had this questionable logic to offer:

Look, that’s one example of one woman beating another woman, with countless examples of men beating women.

Even though Solo should face “retribution,” Kay said, “let’s not try and use that as an example to suggest that women are as guilty of domestic violence as men are.”

So, basically, the world's silence on Hope Solo can be interpreted as one of two backwards attitudes. Either the feeling is, it's so rare to have a strong female athlete that no way can we get risk losing her, even if she deserves it. Or domestic abuse isn't really all that serious when it's a woman doing it. And honestly, I'm not even sure which is worse.