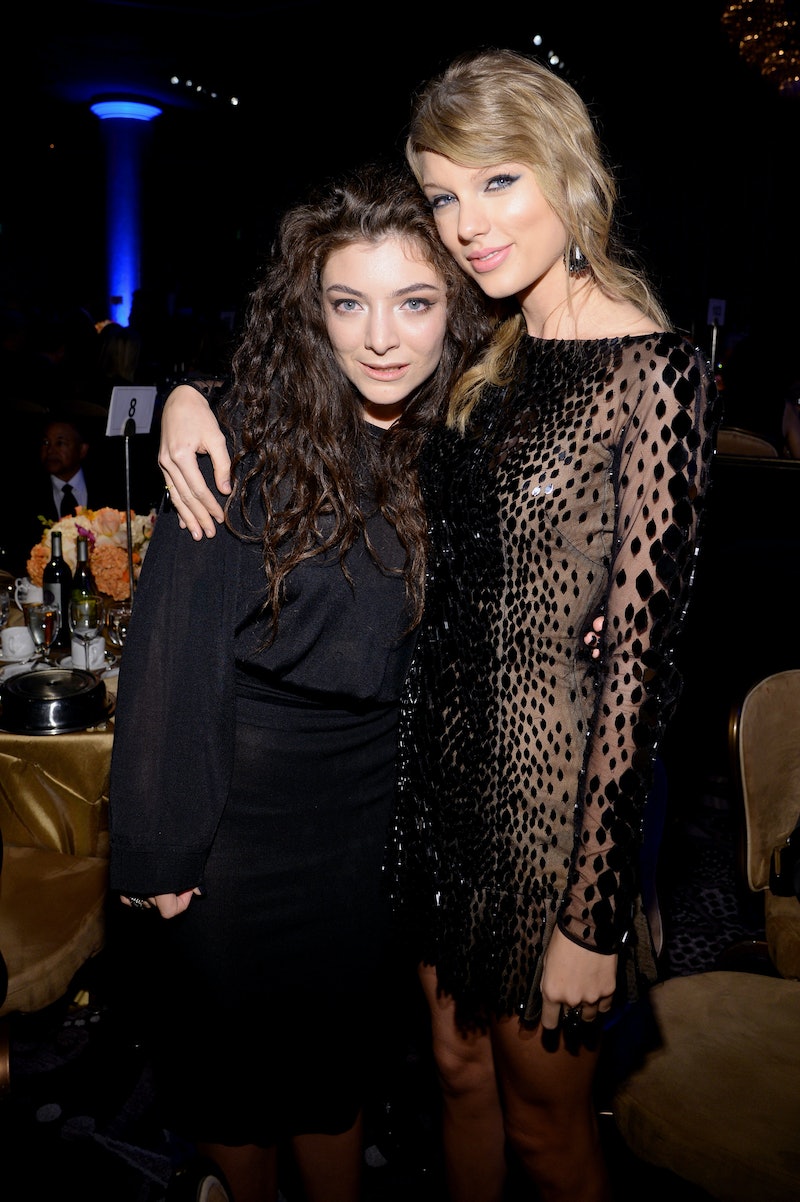 Wanna hear a great idea I have for a pop culture inspired sketch? Here goes. Taylor Swift and Lorde walk into a Michael's. Actually, maybe they're going to Pearl Paint. Whatever. Craft store is the setting. Taylor says to Lorde, "How about we get some..." Then Lorde is like, "Victorian paper dolls? You read my mind! I love..." Then in unison, they chime "Children's crafts for adults? YES!" Oh wait, this is a thing that actually happened in the real world... Taylor Swift got Lorde into paper dolls, and this is just further evidence the fact that Lorde and Swift have officially fused into one person: Lorde Swift.

Yesterday, the "Royals" singer tweeted about her latest obsession: novelty paper dolls. "Raleigh is so awesome i just bought some paper doll books on a whim and now i don't want to do anything but cut out dresses/parasols/hats." She continued to live-tweet her paper doll project, saying in a subsequent tweet: "Basically what's going to happen is i'll get off tour and no one will want to hang out with me." Au contraire, my little gothic phantom of pop music. Your best buddy and companion in all things whimsical, Taylor Swift, will always want to hang out with you. In fact, it seems your best buddy Swift turned you onto this habit in the first place. Sneaky Lorde...

You're never alone in headless high society if you've got a friend by your side.

There you have it, citizens of humanity. Taylor Swift and Lorde share makeup tastes, private cooking lessons, and crafts, as best friends rightfully should. Just for funsies, let's imagine what other DIY projects these two would totally get into together.

Lorde would stitch her favorite Swift lyric onto a pillow, and Swift would immortalize her favorite Lorde lyric in a needlepoint wall hanging. I'm guessing Lorde's pick would be "You coulda' been getting down to this sick beat." Swift's would be "It's a new art form showing people how little we care."

Lorde 'grammed this scene of a bouquet a few months back. It's apparently fashioned from tissue paper and pipe cleaners. What better way to pass the time on the road than trying to figure out how to make one of these?

As we know, Swift is already a watercolor whiz. Her paintings are a growing body of work that Lorde would influence tremendously.

Perfect for showcasing your solidarity at various award shows. Better yet, maybe they'll knit a tandem infinity scarf, fusing them into a two-headed bestie behemoth.

Obviously, for best friend necklaces to be worn under their infinity scarves.

Welp, I think we're all guilty of wanting to do this.

In conclusion: stars, they're just like us. They love activities to occupy idle hands, especially when practiced in the company of friends. Only, when they buy totally overpriced basket-weaving kits, it makes far less of a dent in their bank accounts.