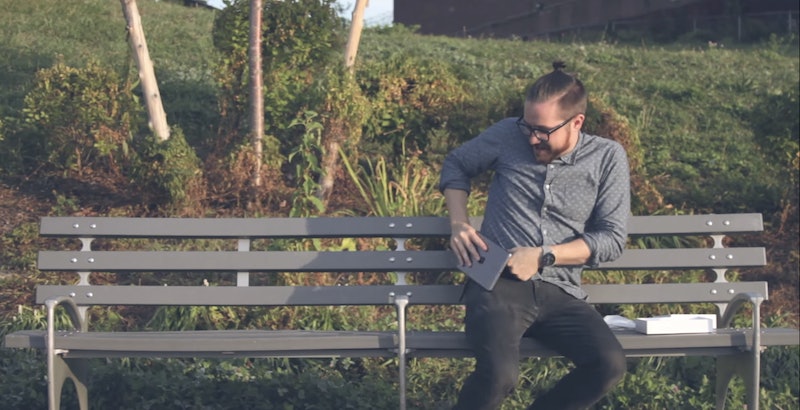 If smartphones are getting smarter, their bodies are definitely growing with their brains. With the new iPhone 6 and 6 Plus models boasting 4.7 and 5.5 inch screens respectively, a whole lot of people around the world have been wondering whether the new iPhone models will be too big for tight jeans, small purses, and tiny hands. A creative agency called Restless New York decided to tackle the question by creating a parody video of director Court Dunn struggling with the new iPhone model’s expanded size.

In the video, Dunn excitedly unwraps his new iPhone — which, though meant to mock the new iPhone 6 and 6 plus models, appears to be closer in size to an iPad mini — and begins to flip through apps, take selfies, and make phone calls.

When he goes to test the “mobility” of his mobile device however, he comes up short: much to Dunn’s dismay, his new iPhone doesn’t fit into any of his skinny jeans' tight, narrow pockets.

Though Dunn does eventually solves the problem by reaching behind him and tucking the oversized smartphone into the back waistband of his pants, it’s clear that the video is meant to parody the widespread worries about whether a bigger iPhone could cut out an important consumer base — anyone who likes to wear tight pants.

Though the Restless New York video is meant as a parody, rather than a true critique of the new models, the bigger iPhone 6 and 6 plus models do actually present some problems.

For one thing, the larger phone interface means a wider stretch for tiny hands: according to The Atlantic, in order to seamlessly navigate the iPhone 6 with one hand, users must have a thumb-span of at least five inches. Research has shown that women’s hands tend to be a half-inch shorter on average than those of their male counterparts, which might make the iPhone 6 less accessible for women (and men) that lack an elongated grip.

Another reason not to ditch your lighter iPod models, even if you’ve upgraded to the iPhone 6 — the new models are too heavy to strap to your arm, and you might still need to use the lighter, more portable music players for your workout routines.

Re/Code reviewer Lauren Goode reported that the iPhone 6 plus was “too big … to wear on [her] arm during fitness activities.” Which makes sense, because each iPhone 6 plus weighs 172 grams, or approximately one-third of a pound. On the bright side: if you’re really feeling ambitious, you could always strap an iPhone 6 to each arm and add some weight training to your morning run.

As iPhones get bigger with each model, it's hard not to get reminiscent about the tiny, 1.24 x 1.15 inch iPod shuffles of the past. I lost my first iPod shuffle because it was so tiny that it slipped through a hole in the pocket of my winter coat and landed soundlessly on the floor, without anyone noticing. This would never happen with the weightier iPhone 6 Plus, especially because it's become evident that these phones are not going in anyone's pockets.

Those who question whether the new iPhones are more like tablets than cellphones might be onto something. Officially, the definition of a cell phone is a mobile, hand-held calling device, which makes me wonder if a phone that barely fits in half the population’s hands and even fewer pants’ pockets can even qualify as a cellphone anymore.