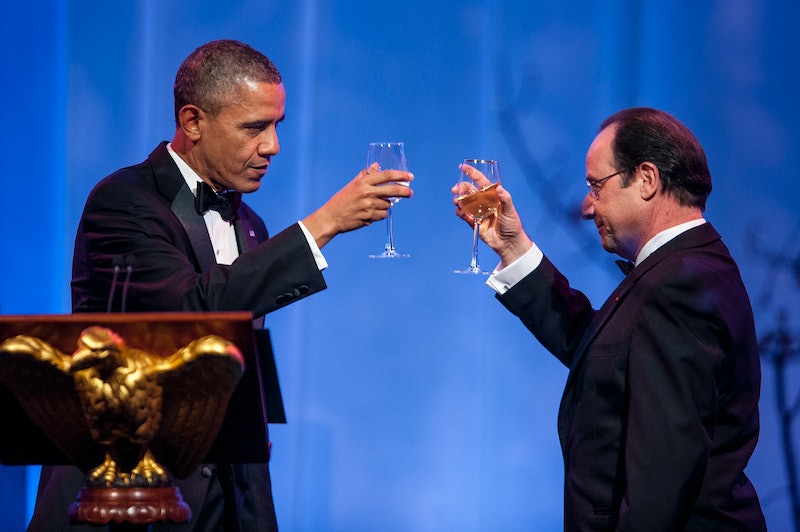 The international coalition against the Islamic State is beginning to intimidate from all fronts. On Friday, France launched its first airstrikes against ISIS targets in Iraq, French President Francois Hollande said Friday. While others have pledged support and aid in the U.S.-led efforts to destroy ISIS, France is the first ally to join the U.S. in conducting such attacks.

This morning at 9:40, our Rafale planes carried out a first strike against a logistics depot of the terrorist organization Daesh [the Arabic acronym for Islamic State] in north-east Iraq. The objective was hit and completely destroyed. Other operations will follow in the coming days.

Other countries who have pledged support in the fight against the Islamic State include Great Britain, Canada, Australia, Turkey, and Saudi Arabia. France, however, has demonstrated an exceptional investment in the mission, adopting the term "Daesh cutthroats" to refer to the terror group, helping to aid Iraqi Kurds, and publicly committing to support the new Iraqi government by "any means necessary."

After the airstrikes on Friday, U.S. General Martin Dempsey remarked:

The French were our very first ally, and they are there again for us. It just reminds me why these relationships really matter.

And this certainly isn't the first time America's relationship with France proved crucial. For example...

After the French and Indian Wars solidified France and Great Britain as opponents, France sided with America in its revolution against England. French troops fought alongside the Continental Army, and the French General Marquis de Lafayette emerging as a prominent figure in the revolution. The French stayed in the fight until America secured its independence from England in 1783.

America was instrumental in liberating Paris from the Nazi regime during World War II. Along with Great Britain, the U.S.S.R. and other Allied powers, America carried out the Normandy Invasion, the first day of which, June 6, 1944, is known as the historical D-Day. Not only did the invasion lead to the restoration of the French Republic, but it was also integral in winning the war for the Allies.

And Then There's The Statue of Liberty

For such an iconic American landmark, people tend to forget that it was a gift from the French. Designed by French sculptor Frédéric Auguste Bartholdi, the statue represents the Roman goddess of freedom and inscribed on her tablet is the date July 4, 1776, when America wrote the Declaration of Independence. The Statue of Liberty is a symbol of freedom and an unofficial welcome post for immigrants.

The Iraq War was one of the few instances in which America and France acted coolly toward each other. When France refused to support George W. Bush's decision to invade Iraq, America responded somewhat petulantly by declaring "french fries" would hereafter be called "freedom fries."