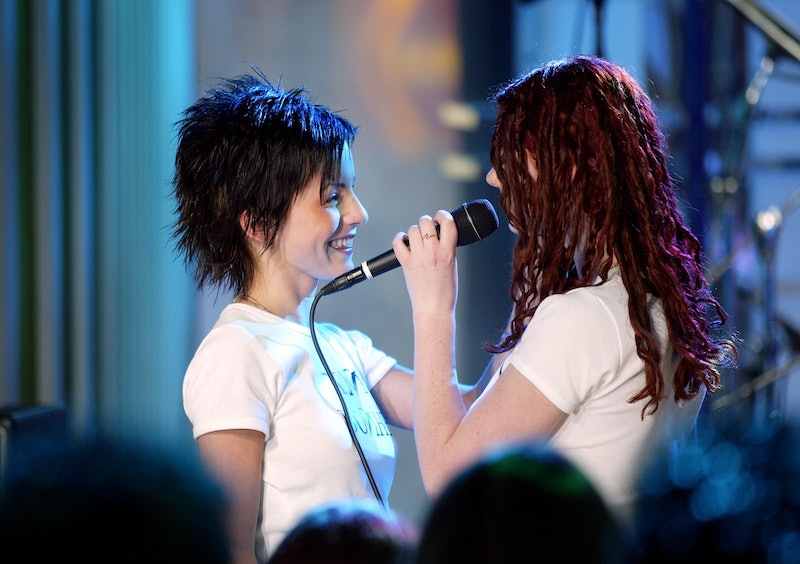 Remember the super popular and symbolic clearly-made-in-the-early-2000s music video for t.A.T.u.'s "All The Things She Said," featuring the pop star duo as bad-ass, in-love lesbians who don't care what anyone thinks of them? Well, yesterday on a Russian TV Program one of the two women, Yulia Vokova, stated that she would condemn her son for being gay. Reminder: this is the same lady who got really famous and made a lot of money for posing as a lesbian, so actually I guess no one is that surprised.

When she was questioned about her son's sexual preferences, which really aren't hers to dictate or judge, Volkova answered:

Yes, I would condemn him, because I believe that a real man must be a real man. God created man for procreation, it is the nature. The man for me is the support, the strength of... I won't accept a gay son.

So now that we have been educated on the fact that men are only around for sex and it is their nature to procreate endlessly as if they exist as only sexual beings, there is a PLOT TWIST in which apparently being a lesbian isn't a problem.

Her complicated beliefs are a glaring reality check to those of us who consume media made by straight people but targeted at the LGBTQAI+ community — people are making money off of something they might not even have any sort of investment or personal stake in. This woman made hundreds of thousands of dollars off a message that she apparently did not agree with, which indirectly gives her power and resources to perpetuate her problematic politics. She has the privilege of performing a certain way in one scenario, and then turning it off in the real world.

Though it's a slightly different scenario, this debate is similar to the one the internet was having when Macklemore released "Same Love." Should this straight, white dude be writing an anthem and spearheading a movement for experiences he knows nothing about? What about Lady Gaga, or Katy Perry? Is bad representation better than no representation?

I don't know what the answers are to these questions, but I do know that it'll be hard letting go of all the feels I had while watching "All The Things She Said" during my formative years. So I guess just one last time t.A.T.u., take us out.