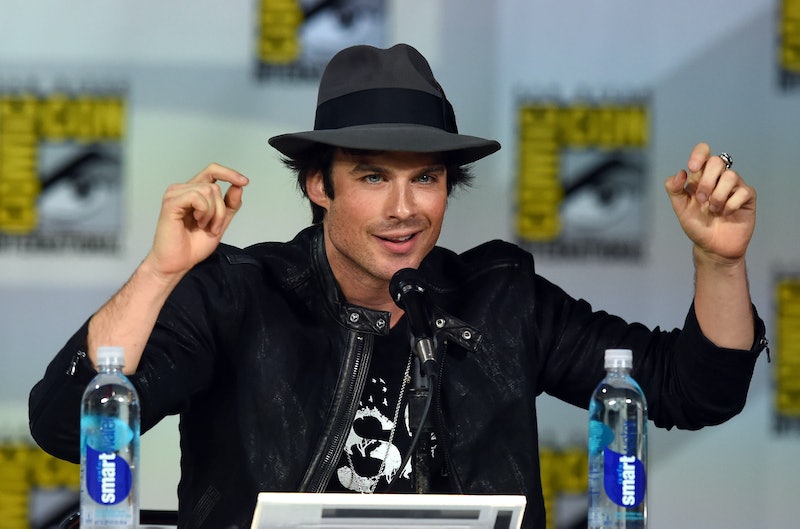 When it comes to separating business from pleasure, plenty of evidence exists that shows dating someone you work with has the potential for producing majorly disastrous results. Personal experience has convinced me that I'd rather be bitten by a vampire than get cozy with another co-worker, but that's just me. One person who obviously has a different take on the issue is Vampire Diaries actor Ian Somerhalder. But currently the actor is straying from trend by dating actress Nikki Reed, a vampire from another series entirely. So how did Ian Somerhalder and Nikki Reed meet if they weren't working together?

Clearly, Somerhalder believes a workplace romance is less messy than having the blood sucked from your neck, so hey, more power to him. But judging by the current romantic drama he's involved in, I'm not sure how he arrived at that conclusion, particularly considering reports that the former Lost actor and his Vampire Diaries co-star and ex-girlfriend Nina Dobrev don't even speak to one another.

I could be going out on a limb here with the following hypothesis (hey, maybe they get along totally fine on set!), but maybe, just maybe, any tension that exists has something to do with Somerhalder dating Nikki Reed, who also happens to be Dobrev's former friend. And the fact that Somerhalder reportedly brings Reed on set at TVD can't be helping matters at all.

The details are fuzzy, but their relationship can be traced back to when Somerhalder dated Dobrev. Reportedly, the then-couple used to double date with Reed and her ex-husband Paul McDonald, which basically sounds more like a love square instead of a love triangle.

Somerhalder split with Dobrev in May 2013 and began dating Reed in July 2014, a few months she filed for divorce from McDonald. Who knows when they became an official couple, but the Internet exploded when they were spotted engaging in some pretty heavy PDA at the farmer's market and then again at a Comic-Con party.

The Somehalder-Reed frenzy intensified when they spent the weekend together. Things progressed even further when the two reportedly moved in together three weeks after they started dating, and are said to have dropped nearly $1000 at a sex shop.

Although it feels like a whirlwind romance, I take their relationship pretty seriously. After all, there's a horse involved.