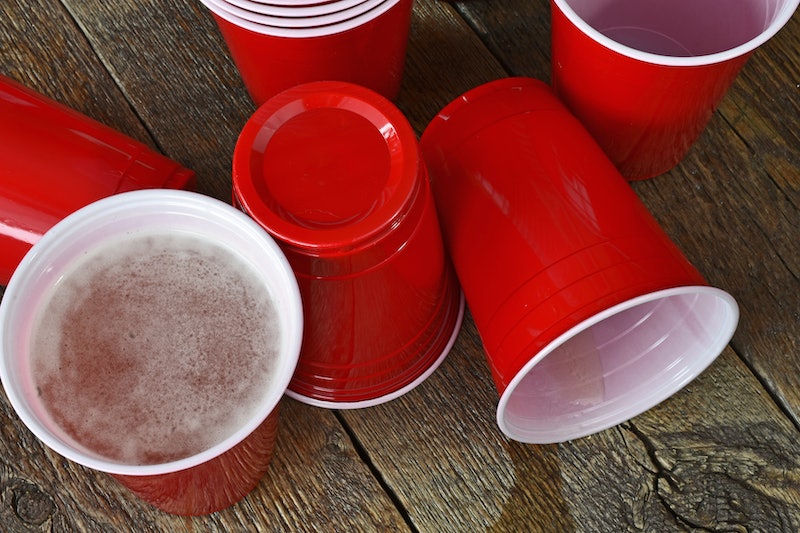 Be warned, this one's pretty upsetting. At this point, most people (those who're paying attention, at least) know what a problem rape is across countless collegiate settings — the prevalence of campus sexual assault was called an "affront to our basic humanity" by President Obama Friday, while launching his new initiative against it. But it only took a day or so for a new high-profile scandal to rock a major university, and the details are disturbing: a University of Wisconsin-Milwaukee fraternity's been suspended over rape drug allegations. Specifically, it's claimed that they used a color-coded system to sort out women who'd receive drugged drinks, and were vulnerable to be assaulted.

It's a gruesome set of allegations, to say the absolute least. According to CBS News local affiliate WDJT-TV, police who responded to complaints found several women at a Tau Kappa Epsilon party last weekend were unable to stand up or walk, two of whom had to be hospitalized. It's alleged that the fraternity was drugging the drinks at the party, and handed out the tainted beverages to women by marking their hands with a red X, rather than the black X that the men at the party were tagged with. In simple terms, it's an allegation of overt and systemized rape.

This isn't even the first time the Tau Kappa Epsilon fraternity at UWM's been suspected this sort of thing — according to the Milwaukee-Wisconsin Journal Sentinel, authorities investigated three sexual assault reports relating to the frat in 2013, but no charges were ultimately filed. Whether the frat's members will be so fortunate following these explosive new allegations, however, is unclear. UWM spokesperson Tom Luljak gave a statement about the allegations, detailed by the Journal Sentinel.

We are deeply concerned about these allegations because the safety of our students is our No. 1 priority. Our police are aggressively pursuing this investigation to determine exactly what happened and who may be involved.

The president of the frat, 28-year-old Thomas L. Kreinbring, has reportedly been arrested and charged on possession of illegal prescription drugs, though that particular charge may not be his foremost concern.

According to WDJT, UWM students said the prevalence of so-called "roofies" on campus, the notorious date rape drug scientifically known as Flunitrazepam, had caused local police to issue warnings about keeping an eye on any party drinks. When ingested, roofies can cause memory loss, blackouts, and leave potential victims completely unable to physically resist their attackers. One student told the station, on condition of anonymity, that her seemingly incapacitated friend was taken home by another concerned partygoer.

One of my friends brought her back, he was just being a good guy, and he brought her back because all these dudes were hitting on her and making out with her, and she was seemingly really wasted.

The university has suspended its affiliation with the frat, but legally speaking that's the extent of their abilities — the frat house itself, as Slate notes, is a private residence, meaning university officials don't have control over what actually takes place within. After an investigation is concluded, however, more actions could be pending.