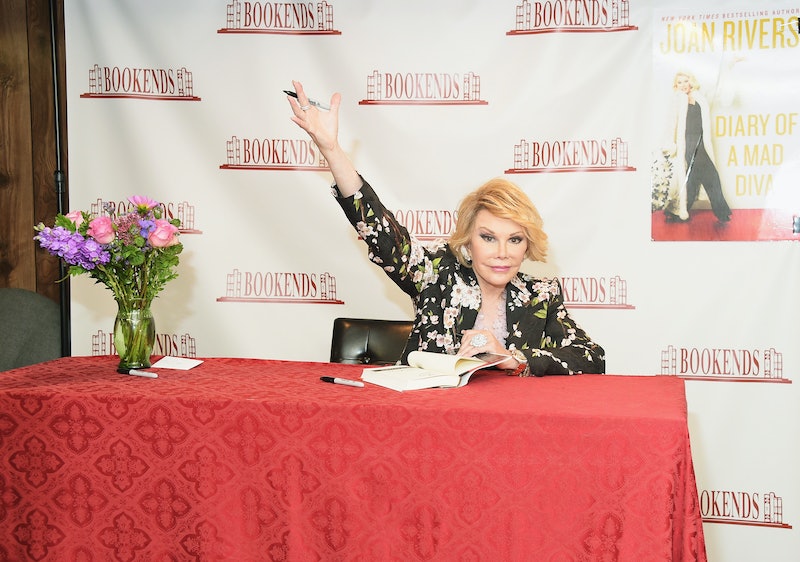 There's no denying that during her life and legendary career in showbiz, the late comedienne Joan Rivers was never short on opinions — and on Friday, a mysterious post that appeared on Joan Rivers' Facebook page had some convinced that she still wasn't done talking. Specifically, on Rivers' Facebook page, a promotional post about the new iPhone went up — despite the fact that she tragically passed away over two weeks ago and the iPhone was only released yesterday.

The message from Rivers' Facebook account, which was thankfully quickly deleted once the blunder was discovered, read: "This badass is being replaced by an iPhone 6 (not the fat one). I got this one in 2010, and after 4 years, my only complaint is that apps are now designed for bigger screens, and the battery is getting tired. Never had a case for it, since it was most beautiful on its own. Great achievement in design. Great product. #apple #iPhone #tech."

So what happened? Was Rivers cozy enough with the folks over at Apple to score one of the new phones before they reached the public? Not exactly — CNN's Doug Gross has the likely explanation of what prompted the so-called message from beyond the grave. In his words: "It's not unusual for publicists or other representatives of celebrities to post for them on social media. The may have been written earlier and scheduled for release Friday, the day the new iPhones hit stores."

This seems likely — and it's actually quite understandable that something like this promotion would slip through the cracks if it had been scheduled to be posted weeks ago, considering the circumstances surrounding Rivers' sudden and shocking death.

And although this entire situation is strange (not to mention a very devastating reminder that we're all still forced to live in a world without Rivers), fans are finding some humor in it, as I'm sure Rivers would have wanted. After all, she lived her life to make people laugh, and even in death, she might find something like this funnier than it is outrageous — and she probably would have appreciated the fan response to it as well. Had it been anyone else, the incident may not have have drawn out jokes like, "iPhone is so big, Joan Rivers came back from the dead to endorse it," (as posted by Twitter user @RebEmSmi) — the fact that is, though, is just another testament to Rivers' far-reaching impact in the world of comedy.