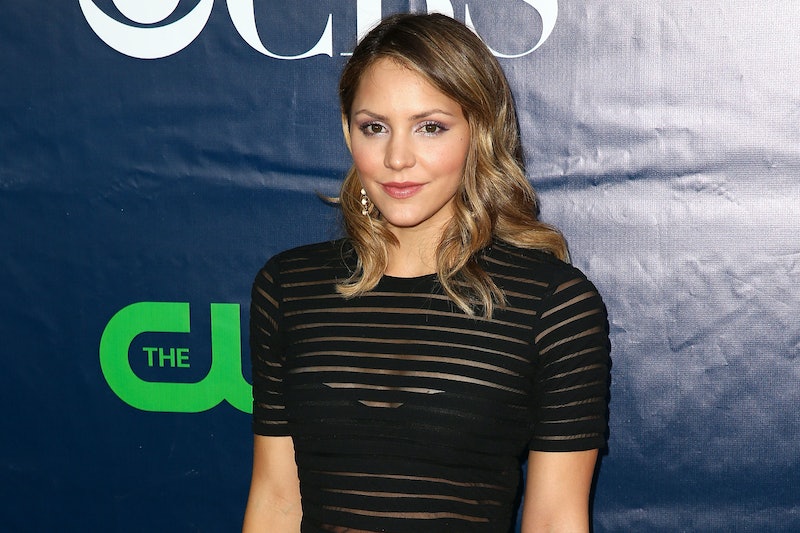 Your probably best remember Katharine McPhee from American Idol , where the fifth season contestant was beat out by Taylor Hicks in the finale. From there, she had a role in The House Bunny, opposite Anna Farris, and was recently seen in Smash, because duh, the girl can clearly sing. Two studio albums later, now she's starring in CBS's upcoming Scorpion. But in between all of this and her continuing rising star, McPhee is going through a divorce. She's been married to Nick Cokas, a producer, for the past six years, but the two of them are in the middle of a messy he-said, she-kissed situation.

Let's go back to 2007, when McPhee's Stuff magazine cover story hit newsstands and in her feature she said, "It's OK [to date older guys]. I gravitated towards them, and I love them. They're just wiser, and they're less about themselves and more about you." Fast forward a year and she, then 23, and Cokas, 42, were married. For the most part, the couple and their marital bliss flew under the radar. Then she went on to star in Smash.

Alright, nothing too revolutionary to report there. Smash came, it sang, and it was canceled. But in October 2013, McPhee was spotted kissing Michael Morris, one of the show's directors, by TMZ. That's where things got interesting. Not only was McPhee still married to Cokas, but Morris wasn't exactly unattached, either. Morris is married to actress Mary McCormack and they have three daughters together.

As reported by TMZ, McPhee claimed that she and Cokas were separated at the time and had been since March 2013. Cokas, however, said that they were still together at he time of her affair and didn't separate until May 2014. Since all of this happened, Morris and McCormack have reportedly reconciled. McPhee and Cokas? Not so much.

On May 22 of this past year, McPhee filed for divorce from Cockas. Their actual separation date is important for their divorce proceedings, considering that according to TMZ, Cockas is seeking spousal support from McPhee. Whether or not she had an affair could have an impact on the proceedings.

But the story doesn't end there. McPhee and Morris might be over, and her marriage to Cokas might be over, but things appear to be heating up on the set of Scorpion. McPhee has been spotted cozying up to her co-star, Elyes Gabel. Hopefully, this pair can keep things low-key as McPhee deals with all of this very public divorce drama.