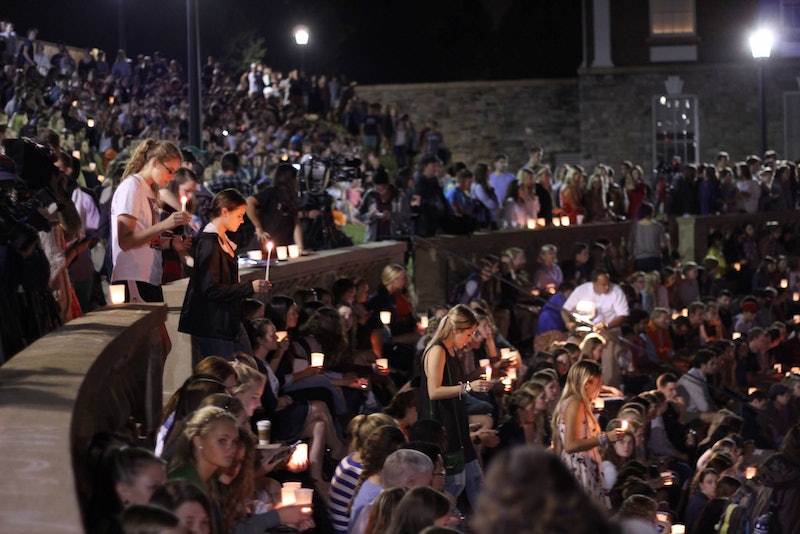 More than a week after she went missing, thousands of volunteers are joining the search for University of Virginia student Hannah Graham. The 18-year-old second-year student was last seen wandering through the downtown Charlottesville area last Friday into early Saturday morning. Although investigators have pieced together surveillance footage from the night Graham disappeared, the search has so far come up empty.

According to NBC News, well over one thousand volunteers convened at the John Paul Jones Arena, an on-campus sports facility, on Friday night to prepare for the massive weekend search organized by the Virginia Department of Emergency Management. The first search shift began at 8 a.m. on Saturday.

Search coordinator Mark Eggeman told NBC affiliate WVIR that an estimated 2,000 people came out to volunteer. "We had over 1,500 people already preregistered. We also have a lot of people coming in...registering on-site," Eggeman said.

According to Eggeman, the search volunteers are looking for any clues, such as pieces of Graham's clothing, or even Graham herself. He said the first area the volunteers will comb is the UVA campus, which "was not searched as well as we would like it to be."

The Virginia Department of Emergency Management also has a public affairs team charged with expanding the outreach and awareness of the missing 18-year-old student. Over the last week, UVA students and Charlottesville residents alike have been using the hashtag #BringHannahHome on social media.

Graham was last heard from around 1:20 a.m. on Saturday, Sept. 13, when she sent a series of text messages to a friend saying she was on her way to a party but was lost. She was reportedly drinking the night she went missing, having just socialized with friends.

The sophomore reportedly lived in off-campus housing, just a few blocks from the UVA campus, with three roommates. Graham wasn't reported missing until last Sunday, when her friends and family realized they haven't heard from her over the weekend.

Over the last week, authorities have strung together surveillance footage in an attempt to trace Graham's steps that night. Videos show Graham walking past an Irish pub, running past a Shell gas station, and wandering through a pedestrian mall in downtown Charlottesville. While in the pedestrian mall, Graham can be seen walking by a pizza place and a jewelery store.

According to authorities, it appeared a man was following Graham in one surveillance video. The man later came forward, telling police that Graham looked "distressed" and he was keeping an eye out on her.

On Friday, authorities identified a person of interest in the case. According to ABC News, police believe Graham entered a bar with a 32-year-old man, and they stayed there for about 15 minutes. Graham may have gotten into the man's car — a 1998 burnt orange Chrysler coupe.

Authorities were able to seize the car on Friday, and later received a warrant to search the man's apartment. However, after questioning the man, police said there was not enough evidence to take him into custody. They also emphasized that he's not yet a suspect.