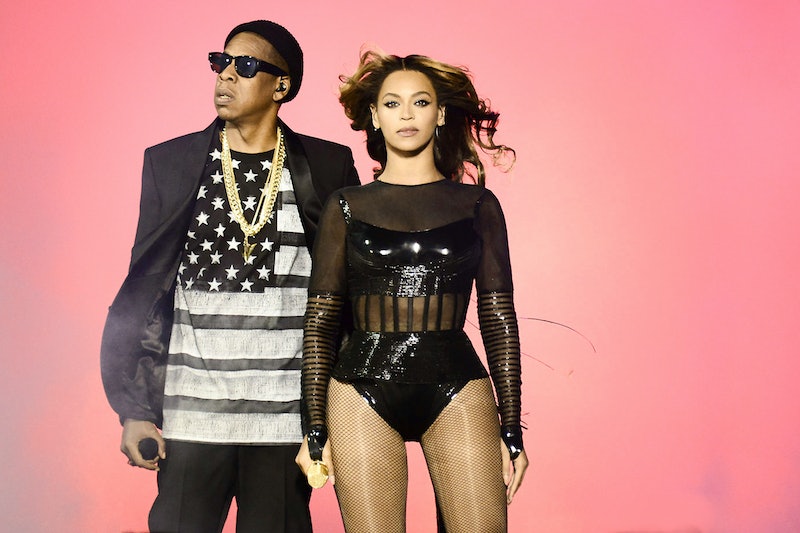 You'd think there'd only be so much Beyonce one person could take. After all, just two months ago, I sold my soul for the opportunity to finally see Mr. and Mrs. Carter perform in Atlanta, and it was nothing short of a religious experience. However, I was super excited for Saturday night's HBO On The Run special, mostly because my outrageously expensive scalped tickets afforded me what I can only describe as the worst seats in the house. Sure, I knew it was Queen Bey on stage, but I couldn't actually see anything that was going on down there since I was practically seated in another zip code.

From the time the show starts with a face mask wearing Beyonce, her duet with hubby Hov as they perform "'03 Bonnie and Clyde," and a lot of booty shaking, the special proved the thing we've all known all along: Beyonce and Jay Z, despite their recent drama, aren't going anywhere. Hollywood's most golden of couples is here to stay, and now that I have a front row seat for the show on my couch, it's all the more clear.

From this view, I can totally see everything I missed the first time around — and even though I was in love with "On The Run" before, it's even more amazing when you can get the whole experience. Like...

The epic videos played on the screens that set the stage.

If you've seen Beyonce and Jay Z's recently released short film clip, you already know that the "On The Run" tour was populated with black and white, film noir-style videos of the Carters as fugitives running from... something. I totally missed these the first time around, since the screaming in the arena was way too loud to hear what was going on. And hey, fellow Atlanta concertgoers... I'm really sorry about that.

For all I know, the people on stage could've been really convincing body doubles. On the TV version, I can actually see the beautiful mugs of my relationship role models — and can we talk about how happy Jay Z looks to be performing? I can't remember a time I've ever seen him smile, but he truly enjoys being on stage. Heartwarming.

What they're saying to the crowd.

How talented their dancers are.

Being that I had a side view of the stage, I couldn't really see what their dancers were doing when they took the stage during interludes between songs. Now that I can see, I'm thoroughly impressed. Can I get the name and number of their trainer?

"If I Were A Boy" and its awesome rock vibe.

Beyonce's single about how she'd make a kick ass dude was a huge crowd favorite, and obviously, I was there screaming the lyrics along with the best of them as I fought off my nosebleed. What I couldn't hear live? The fact that the normally R&B melody had been swapped out for rock in the concert version.... and it's awesome.

The precious clips of Blue Ivy that played during "Halo."

Because when you're in an stadium that holds over 70,000 people, you leave before the last song in order to get out of the parking lot sometime before next week.