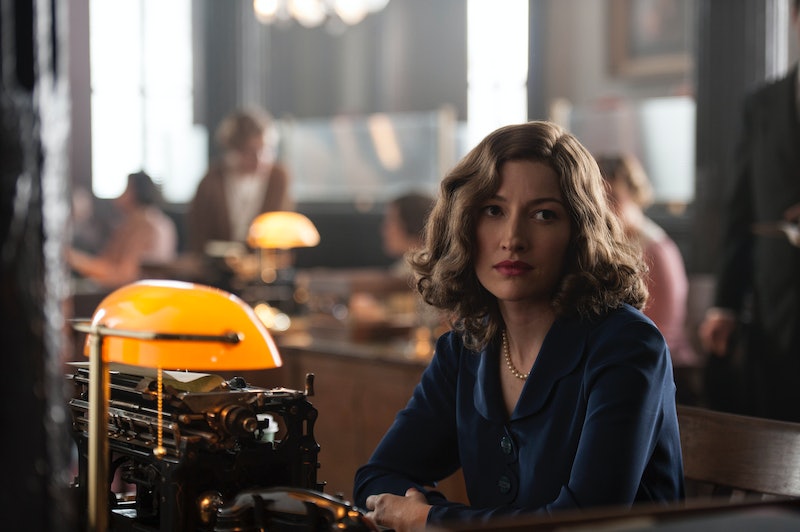 This was fun while it lasted, I suppose. After building Margaret up to be her own, independent woman that's working for her money, Boardwalk reduced her right back down. In the Boardwalk Empire Season 5 premiere, it seemed like women were finally going to get the attention they deserve. For one, there was Sally Wheet who's a total boss and then there was Margaret who was working her way up. But in Sunday night's new episode of Boardwalk Empire, Margaret's agreement with Arnold Rothstein crumbled around her and there she was at the end of the episode, back with Nucky Thompson looking for help. And, well, it was completely disappointing.

Yes, Sally Wheet is a total boss and a welcome breath of fresh air for Boardwalk because she actually plays on the same level as the big boys and Nucky's not too intimidated by that to be her man-friend. And Margaret was well on her way there too, brokering deals with Rothstein and gaining the trust of her boss until Sunday night's episode. Following her bosses suicide, an investigation was made on Rothstein's secret account with the firm and, of course, Mrs. Rothstein got involved. Apparently, the shit really hit the fan when good, ole Arnold kicked the bucket in 1928 and now she wants what's rightfully hers. And she's going to take it from Margaret.

Basically, Mrs. Rothstein wants to sue Margaret for more than what she's worth because she totally knows that Margaret was once married to Nucky. And because Mrs. Rothstein has lost everything her husband had given her to this investigation. She's angry and she's not feeling particularly charitable towards the woman her late-husband put up in an apartment in exchange for insider trading tips. So, in all of Margaret's efforts to make it on her own without Nucky's help, she's ended up having to ask him for help anyway — 'til death do they part.

While I know Margaret and Nucky aren't going anywhere romantically because this isn't The CW, it's still disappointing that she has to go back to him under these circumstances. Though Sunday night's episode didn't get past their initial meeting, I don't necessarily believe that Margaret's just there to warn Nucky that a lawsuit is coming. She's going to ask for help because, while she doesn't want it, she's officially in a position where she needs it. Unless Margaret wants to find herself and her children out on the street because of Mrs. Rothstein.

I don't want to discount Mrs. Rothstein's struggle, but it's disappointing that Margaret has to go back to Nucky. Especially when it's a situation that involves money. Margaret worked so hard and Boardwalk set her up as this new, independent, self-sufficient woman and now it's dragging her right back to belonging to Nucky. Margaret's worth a lot more that shuffling between powerful men and, in the case of Nucky, asking for help. But it looks like HBO and Boardwalk are yet again writing women as causing problems for men and that's totally uncool.