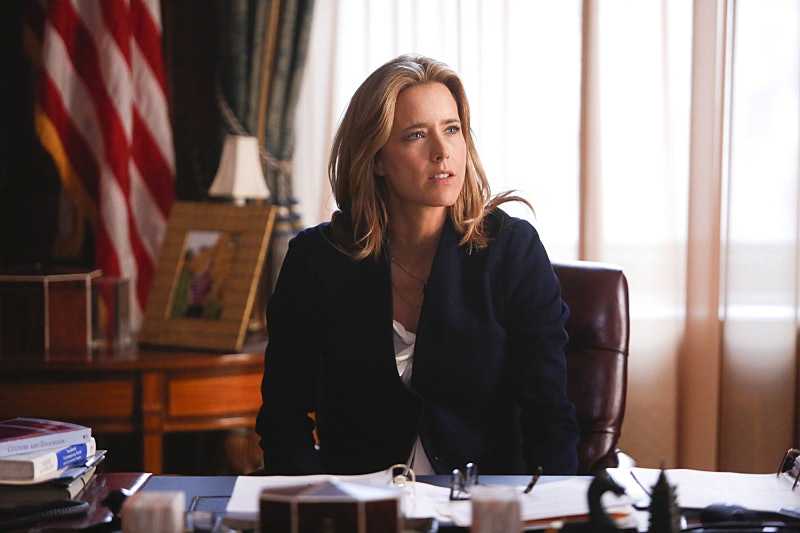 I've got to say, between Madam Secretary and The Good Wife, Sundays on CBS may be the night and place to go for feminist power on television. We all know how strong and brilliant Alicia Florrick is on The Good Wife, but Tea Leoni's Elizabeth McCord is definitely a great match for Julianna Marguiles' fictional lawyer. On Sunday night's series premiere of Madam Secretary, Elizabeth McCord becomes secretary of state and rather than getting the chance to tackle issues a Secretary of State should handle, the President's Chief of Staff ignores Elizabeth's requests to help get two students out of a Syrian prison and continuously tells her to get a stylist. It's not exactly rocket science to figure out that a male Secretary of State wouldn't have to deal with that.

These are the kinds of sexist comments Madam Secretary should continue to combat throughout its run as these are issues actual women in power deal with every day, including the way some women in government see their wardrobe become almost more important to the media than their political views or policies. Remember when Sarah Palin's $150,000 wardrobe budget was scrutinized by every media outlet on the planet? Sure, Palin's situation is different as she was running for national office and was scrutinized for other reasons during her vice-presidential campaign, while the fictional Elizabeth McCord on Madame Secretary is already in her national office position. But that makes her "image" more important according to the Chief of Staff on the show.

Thankfully, the series not only shines a light on the problem, but flips it on its head by using the image and stylist sexist problem to Elizabeth's advantage. While trying to broker a deal to get the two students freed from the Syrian prison under the radar of the President's Chief of Staff and everyone else except the President himself, Elizabeth (Tea Leoni) finds out that the students' parents have agreed to give an exclusive interview about the imprisonment to the New York Times which the publication will publish the next day if there is no other urgent news that should be published instead. In order to avoid the press and the subsequent embarrassment for the President and his staff (including Elizabeth), and to get more time to get the students released, Elizabeth hires the stylist sent by the President's Chief of Staff and has the stylist revamp her wardrobe to be more modern. That way the news will focus on her style rather than the possible controversy the students' imprisonment would cause.

If more women in government and other powerful positions could manipulate the inherent stereotypes and sexism they face every day, things would get so much better for us all. Though it's only aired one episode, Madame Secretary clearly understands this and embraces it. It may be worth a second watch after all.