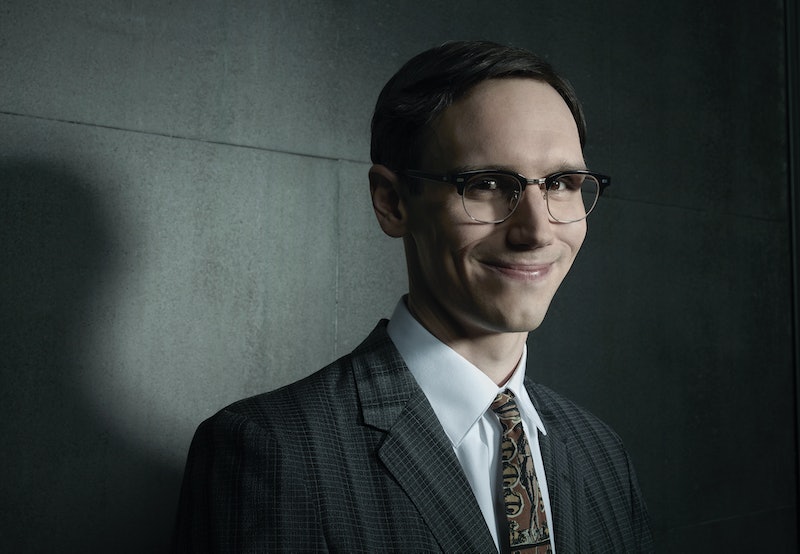 Alright, Fox. You did it. With all of the Batman characters you're bringing to the small screen, I don't know how to contain my excitement anymore. It seems the network's new Batman prequel series Gotham will introduce not only the man who becomes the Penguin, the boy who becomes Batman, the girl who becomes Catwoman, and some mysterious villain played by Jada Pinkett Smith, but it will also introduce us to Edward Nygma, better known as The Riddler. While Cory Michael Smith's version of The Riddler won't automatically begin with him wearing a bright green suit and spewing obnoxious riddles at people all day like Jim Carrey's Riddler in Batman Forever, there should be a few hints of the character we all know and love (or hate) within him. And there's so much more to Edward Nygma than what Carrey gave us all those years ago.

Edward Nygma has, like many Batman criminals, received many rewrites to his origins. In some comic issues, he was abused by his parents as a child. Believing his child to be an idiot and a cheater, Edward's father would beat him. And because of this, Edward grew up with the compulsion to prove his intelligence through solving riddles and puzzles. In other comics, the obsession with riddles was ingrained in Edward from the start. In fact, in some issues Edward was so obsessed with solving a puzzle from school that he broke into the school late at night to try and practice solving it the fastest so he could be the smartest kid in class.

This obsession with being the smartest guy in the room and outwitting through puzzles and riddles causes Edward to need to act out in order to have his compulsion met. He lashes out with villainy for this reason.

Just like his obsession with puzzles, the Riddler's outfit is iconic. He wears a green one-piece suit donned with black question marks and often holds a cane topped with a matching question mark.

In Gotham, we don't see much of the future Riddler in the pilot, but Entertainment Weekly described the character as "a brilliant young forensic scientist working for Gotham PD and a penchant for speaking in … rather cryptic language." That strange way of speaking clearly this refers to his riddle madness, but in the Batman comics, Edward Nygma hasn't been written as a police officer-turned-villain. He has, however, been portrayed as an informer for mob boss Carmine Falcone, which could be the version Gotham will use.

Perhaps Gotham's Riddler will believe that he is much smarter than most of his police officer counterparts, and therefore he acts out. Maybe he informs for Falcone. Maybe he starts his villainous tendencies by stealing here and there and leaves little riddles to see if anyone can actually stop him. Eventually, we know that won't be nearly enough to satisfy his obsession.

What I do hope is that we get to delve into Edward Nygma's psychology and see why he absolutely must be the man who can solve any riddle, any puzzle. No matter what origin Gotham uses, seeing that compulsion begin and strengthen will be fascinating.