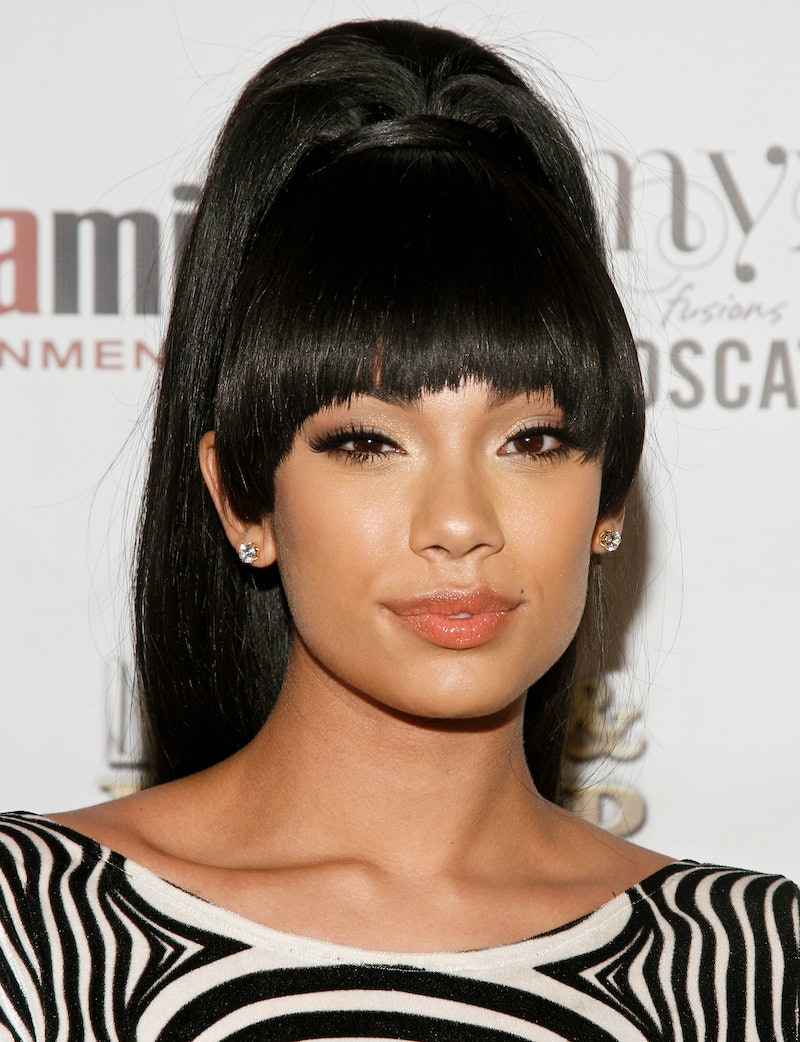 Ah, it seems like only yesterday that Bow Wow was an extremely lil lad. Now, the rapper is all grown and wifing up. Like, literally. Bow Wow is engaged to Erica Mena, his girlfriend of six months. If you're not plugged into reality television and don't keep a dossier of early aughts video vixens, you may be askingy yourself, "Who is Erica Mena?" Well, she's an actress/model/TV personality/video game tycoon/seasoned selfie-photographer — exactly in that order.

According to Us Weekly, Mena first announced that she and Bow Wow (birth name Shad Moss) were officially engaged at a red carpet interview for the BET awards on Saturday. Later on that weekend, Bow Wow confirmed the news by posting a picture to his Instagram of Mena's engagement ring. Mena and Bow Wow first made acquaintance while filming an episode of 106 & Park (Bow Wow is a host of the show) in 2014 and began dating shortly after. If her name rings a bell, you're probably an avid watcher of Love & Hip Hop: New York, which she's been on for three seasons.

I have a morbid fascination with the social media lives/ branding activity/creative endeavors of guilty pleasure TV stars (especially the Bad Girl's Club alumni, but that's a story for another day). Assuming that everyone reading this is exactly like me in that way, let's investigate the life and times of Erica Mena: mother, former Dash Doll, and body-painted mermaid.

Mena dated music producer Rich Dollaz for a spell while on Love & Hip Hop. She also has a past of dating women. After dating "Rich Dollaz," Mena went on to have a relationship with Love & Hip Hop cast-member and video vixen Cyn Santana, pictured above. They look eerily like twins.

She lives to take pictures of herself

She has a 6-year-old son

His name is King. Here he is, sunbathing next to mom with a hot pink neck pillow around his shoulders. #Livingthelife.

She was a "Dash Doll"

If you're an acolyte of every last Kardashian spin-off, Mena may look a tad familiar to you. She was the especially recalcitrant Dash employee from Season 2 of Kourtney & Kim Take Miami who repeatedly showed up late to work with a poor attitude. Well, everybody's gotta start somewhere, right?

In addition to modeling for RocaWear, Tommy Hilfiger, and Loreal, she played the girl that Chris Brown bothered relentlessly in "Excuse Me, Miss."

Melancholy R&B ballads about torrid affairs should all have this kind of cover art.

According to her website, Mena is developing a video game app. While details are scant on what the objective of the game is, it would appear that users lead the Erica Mena mermaid around an undersea society to various music video shoots, guest appearances, and selfie-friendly reflective surfaces. Kinda like Kim Kardashian: Hollywood but in the ocean.

There you have her, folks... The future Mrs. Wow.