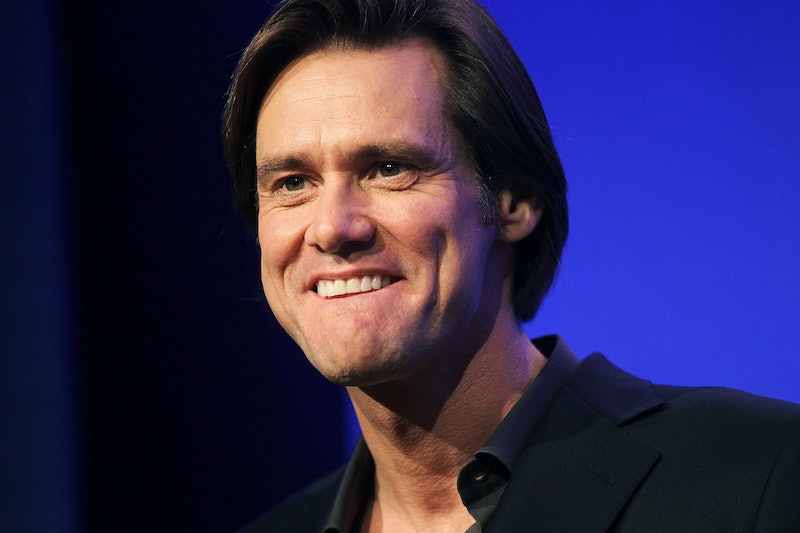 The premiere episode hasn't even aired yet, but Saturday Night Live 's 40th season is already off to a great start. The kickoff to the anniversary season begins Sept. 27, with Chris Pratt hosting the first episode with musical guest Ariana Grande, but a recent report on The Wrap states that Jim Carrey will also host Saturday Night Live early this season. Carrey is, of course, known for his physically exaggerated roles in film and comedy. This will be his third time hosting Saturday Night Live.

Carrey, who has recently appeared in the sequel Kick-Ass 2, has been promoting his new film Dumb and Dumber To to get fans ready for the follow-up to the 1994 fan favorite staring himself and Jeff Daniels. Promotion for the film is most likely what will bring him to SNL — Dumb and Dumber To is set to hit theaters Nov. 14. Carrey has hosted Saturday Night Live twice before, in 1996 and 2011, and has been a part of well remembered sketches, like "The Roxbury Guys" skit with Will Ferrell and Chris Kattan.

To prepare you for Carrey's return to Saturday Night Live, let's look back at his best skits from his previous two hosting gigs.

"The Roxbury Guys" is one of Saturday Night Live's most well recognized skits, as I'm sure all of us instantly start bopping our heads whenever "What Is Love" starts playing.

Carrey played an enthusiastic jacuzzi lifeguard in 1996, protecting the safety of the swimmers inside the jacuzzi.

Carrey also hosted in 2011, where he did a parody of the year's hit Black Swan, playing the edgy dark swan queen. The best part? When Carrey reveals his wing tattoo to be buffalo wings.

Also in 2011, Carrey played a pretty terrible psychic who used to be a comedian impressionist, and can't seem to shake his last profession.

For a real blast from the past, check out Carrey's monologue from 18 years ago, when he first hosted in 1996.