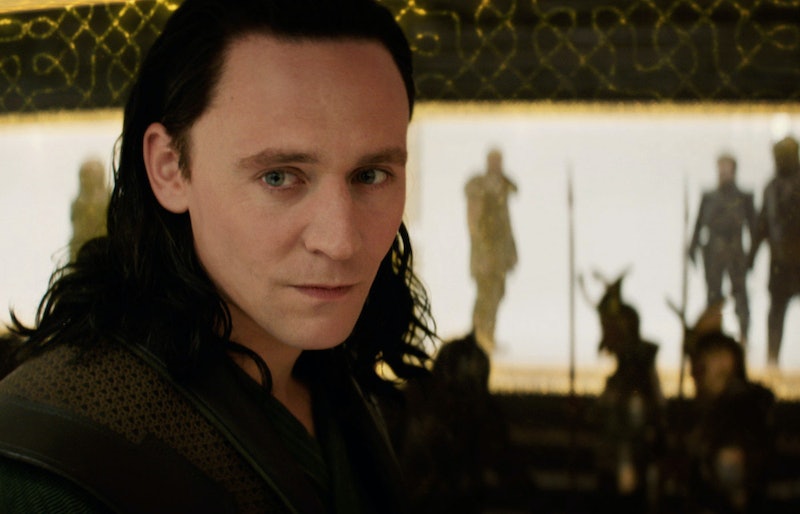 Can you imagine a world without Tom Hiddleston's Loki? We might have to if these Thor 3 spoilers are right in guessing that Loki will die. Thor already thinks his brother is dead in Thor 2, but we know that was just one of Loki's tricks, and the God of Mischief will be back for the third installment. But will that sequel be Tom Hiddleston's last? If the movies follow the comic books, it could be.

Chris Hemsworth, who plays Thor, speculated that the movie could follow the comic's Ragnarok path, which essentially tells the end of Asgard. "I think that in the comic book the sort of end of days, Armageddon aspect is probably the direction in which it will all head in," Hemsworth said. "Where it's sort of the end of all things. There's obviously no script or anything, [but] when I read the comic books I thought it was an interesting way to go."

But that could mean a final goodbye to Loki because in that comic version, Thor rips off his brother's head to kill him once and for all. It's a rather graphic end for the beloved villain, but Ragnarok is not the only reason Thor 3 could spell Loki's end. Cinema Blend speculates that Tom Hiddleston's new role in the King Kong prequel Skull Island could tear him away from the Marvel series.

There is some pretty obvious franchise potential to be mined [with Skull Island]. As much fun as the actor has playing Loki, I don’t think many of us would be surprised if he decided to move on and pursue something bigger for himself.

But with all the evidence pointing to Hiddleston's exit from the series, I happen to think he'll stick around awhile longer. Even if he were to die at the end of Thor 3, Marvel demises should be taken lightly like when Phil Coulson escaped from certain death. And let's not forget that Hiddleston's Loki is contracted for more Marvel movies. In 2011 he spoke to the Italian website Comicus and revealed what's in store for his character's future.

When I signed my contract, I signed to play Loki in five more Marvel movies, but they were unspecified. So, if there will be more movies or not remains to be seen, but I like the idea of Loki turning up in the shadows when people least expect him. You never know these things, the world changes and the things change, but I feel like I know who Loki is, so I wouldn't mind [returning].

So far Hiddleston has only played Loki in Thor, Avengers, and Thor 2, and is slated to play him in Thor 3 . But that still leaves one film to go on his contract. It seems doubtful that Marvel would throw that opportunity away, especially because Loki is such a fan-favorite, and Hiddleston's take on him basically carried the second film.

So are these Thor 3 rumors true? There's no telling as of yet, but all I know is that the franchise better die before Loki does because he's too interesting of a character to let go for good. Besides, Hiddlestoners would never forgive Marvel if things went any other way, and you don't want to mess with them.