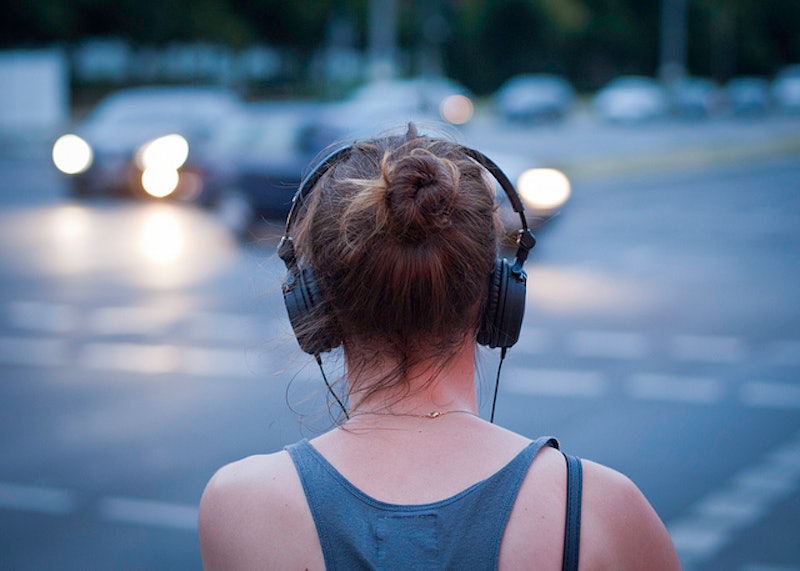 For some, confidence is an acquired skill rather than an innate tendency. But what if you could boost your confidence in a matter of minutes? There's such a thing as confidence-boosting music, according to a study from The Society for Personality and Social Psychology, and it's the kind that's all about that bass. According to Derek Rucker, co-author of the study and a professor at Northwestern University's Kellogg School of Management, the level of bass in a song has the power to increase confidence, improve abstract thinking, and make us feel in control:

Just as professional athletes might put on empowering music before they take the field to get them in a powerful state of mind you might try [listening to bass-heavy music] in certain situations where you want to be empowered.

Rucker's study divided participants into two groups, exposing one to "high power" music with lots of bass, and the other to "lower power" music. High power songs like Queen's "We Will Rock You" and 50 Cent's "In Da Club" generated far more power and focus in the participants than low power songs like Baja Men's "Who Let The Dogs Out?" and Biggie's "Big Poppa." The study then asked participants whether they would opt to go first or second in a debate. Those who had listened to the high power, bass-heavy songs chose to go first nearly twice as much as those who had listened to a low power playlist. The study concluded that this feeling of confidence and power could translate to the working world. According to Rucker:

One thing we know from prior research is that people who feel powerful tend to make the first offer in negotiations. Essentially, power is a propensity to act, to take charge of the situation.

Whether or not you're the type to exude natural confidence, therefore, listening to certain music can properly equip you to perform well in an upcoming interview or speak up in your next meeting. Of course, selecting the right songs is crucial, and a variety always helps. Although I'm certainly a fan of classics like "In Da Club" and "We Will Rock You," listening to them on repeat might lessen their effect. But never fear! I've taken the liberty of compiling some of my favorite bass-heavy tunes that are sure to transform you into your most confident self. (You can download the full playlist at the bottom of the page.) Happy listening!

A pump-up song of epic proportions.

What could be more effective than a song that tells you to "drop the bass"?

3. DROP IT LIKE IT'S HOT by Snoop Dogg (feat. Pharrell Williams)

Exactly what you're gonna do in that boardroom after listening to this song.

4. EYE OF THE TIGER by Survivor

I have to admit, I used to listen to this in high school before taking standardized tests. And I did pretty well. So to all my friends who laughed at me back then, now I have science on my side!

As perfect for a pre-interview warm up as it is for the club.

6. GET LOW by Lil Jon and The East Side Boyz

I don't even consider this a throwback, since it somehow makes its way into every modern-day playlist I create.

The Cataracs may be no more, but the bass lives on.

This remix is sure to boost your confidence even more than the original.

Lil Wayne has no worries and you won't either after listening to this song.

Maybe "no one man should have all that power", but I think a woman should...

Any song is better with a little Kendrick.

13. REMEMBER THE NAME by Fort Minor (feat. Styles of Beyond)

14. 'TIL I COLLAPSE by Eminem and Nate Dogg

One of Slim Shady's best.

15. TURN DOWN FOR WHAT by DJ Snake and Lil Jon

Turning up doesn't just happen at the club. Now go ahead and take on the world!