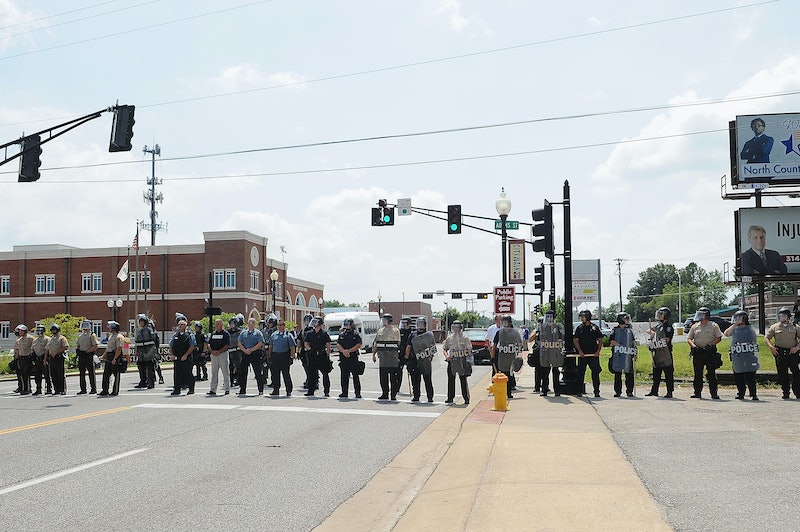 Oh, boy. If there's one thing, one single little thing, you'd expect the police departments of St. Louis County not to be doing right now, it'd be producing promotional fliers about slain Ferguson teenager Michael Brown, right? That would be in such poor taste! Well, prepare to be surprised: the St. Louis Police Department's "exciting" Michael Brown seminar, detailed by ThinkProgress, is every bit as nakedly tone-deaf as it sounds. It's billed as a program to help police officials and representatives handle the media after high-profile incidents — specifically, officer-involved shootings.

It's a pretty seedy document on its own, disclaiming the Brown shooting as "tragic" before launching into an enthusiastic sales pitch on becoming a better media manipulator. In context, though, it strikes an even worse note, given the circumstances that have evolved since his death at the hands of Officer Darren Wilson. The Ferguson public's distrust of the police, and their statements to media, has been a cornerstone of the outrage since Brown's death.

So invoking his memory to promote a program about controlling media narratives after cops kill people is, to put it lightly, a very bad look.

The shooting death of a black teenager by a white police officer on August 9th in Ferguson, Missouri and the events that followed were tragic. In addition to the Ferguson case study, this fast-paced class is jam-packed with the essential strategies and tactics, skills and techniques that will help you WIN WITH THE MEDIA! It is practical training, not theoretical: Take what you learn and put it to work for you on the street right away! The training is also highly entertaining: numerous video clips illustrate key points, and there is NO PowerPoint! You will learn a lot, and you’ll have fun doing it!

So, basically guys, you heard it here first: Remember how poorly we controlled the media narrative about that shooting everyone's pissed off about? Well forget all that, because it's time to learn how to win with the media!

Twitter activist Shaun King, who brought the flier into the public awareness Saturday, expressed particular disgust for the invocation of "feeding the animals."

In a statement to the Associated Press, the department said that the terms weren't intended to be race-related:

Hmm. Considering the circumstances, it's incredibly loaded language — weeks ago, a Ferguson police officer was caught on tape during the protests, yelling "bring it, all you fucking animals!"

Honestly, though, there's nothing inherently shocking about a police department running this kind of program — any organization that deals with media regularly is well-served to know how to do it, after all — but law enforcement is a somewhat different matter. When there's an officer accused of wrongfully killing a member of the community he's meant to protect, a deference to truth regardless of media spin would be better.

After all, among the many aspirations of the Ferguson protest movement, increased transparency and openness rank pretty high. The suspicion that the Ferguson police haven't been on-the-level with their statements to the press — highlighted by The Blot's Matthew Keys, whose recent FOIA request undercuts Ferguson Police Chief Tom Jackson's stated reason for releasing controversial surveillance footage of Brown — is a durable and toxic one, and it isn't going to change unless the department allows it to. And that, based on their upcoming training schedule, doesn't seem to be forthcoming.

More like this
Joe Lycett Just Took HIs David Beckham Qatar Protest To A Whole New Level
By Sophie McEvoy
Footballer Jake Daniels Shared His Thoughts On A World Cup Boycott
By Sam Ramsden
Iran Has Issued A Death Sentence Over Mahsa Amini Protests
By Catharina Cheung, Darshita Goyal and Maxine Harrison
Twitter Is Upset About Dave Chappelle & Louis CK's Grammy Nominations
By Grace Wehniainen
Get Even More From Bustle — Sign Up For The Newsletter