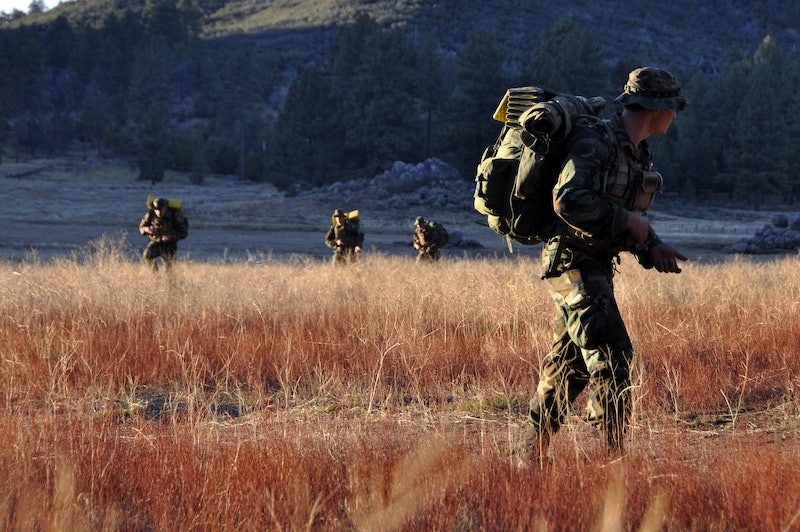 They may have been found, but the mystery hasn't been solved yet. After disappearing from their training base in Cape Cod on Saturday, the three missing Afghan soldiers have been found trying to enter Canada near Niagara Falls on Monday. The question now is what on earth these trainees of the Regional Cooperation training program at Camp Edwards were up to; officials suggest that the men do not pose a threat to anyone.

Identified as Maj. Jan Mohammad Arash, Capt. Mohammad Nasir Askarzada and Capt. Noorullah Aminyar, the three Afghan nationals had been participating in a two-week annual exercise, sponsored by the U.S. Central Command, designed to strengthen relations between the U.S. and the participating nations. The three men, who are senior military officers, had been cleared by the U.S. State Department in a thorough vetting process along with the exercise's 200 participants. The soldiers first arrived at Joint Base Cape Cod on Sept. 11.

Massachusetts National Guard spokesman Lt. Col. James Sahady told Boston.com that not all of the 200 participants are required to stay on the base at all times. Many of them were cleared to go into town for dinner or other activities.

When addressing whether these men's intentions were malicious, Col. Timothy Alben of the Massachusetts State Police told NBC News:

There's no reason to think they have nefarious intent, and no information to suggest that public safety is in question.

In fact, officials believe that they were possibly trying to defect and avoid going back to Afghanistan, and had attempted to cross into Canada to seek asylum there — since our northern neighbor has more lenient asylum laws. Last week, two Afghan officers who were participating in a DEA training program also disappeared with the goal of trying to stay permanently in the U.S. And earlier this month, a senior Afghan officer who was supposed to participate in the NATO Summit in Wales applied for asylum upon his arrival in the UK.

So what exactly happened with the three men who took off from Joint Base Cape Cod? According to eyewitnesses accounts and information from multiple sources, a timeline can be constructed of the three soldiers' escapade.

Thursday, Sept. 11: The three men arrive at Camp Edwards, a National Guard training facility at Joint Base Cape Cod, along with the rest of the 200 participants.

Saturday, Sept. 20: The men were last seen on a chaperoned trip to the Cape Cod Mall in Hyannis.

Before the men were reported missing, a male witness interacted with one of the soldiers at Craigville Beach in Centerville in the late afternoon. The soldier identified himself as "John" and asked which way Canada was and how long it would take to drive there. According to the witness, "he looked like he was having the time of his life."

Monday, Sept. 22: The three Afghan men were found at the Rainbow Bridge, which connects the U.S. with Canada, and taken into custody. According to a law enforcement source, they told Customs agents that they were refugees.