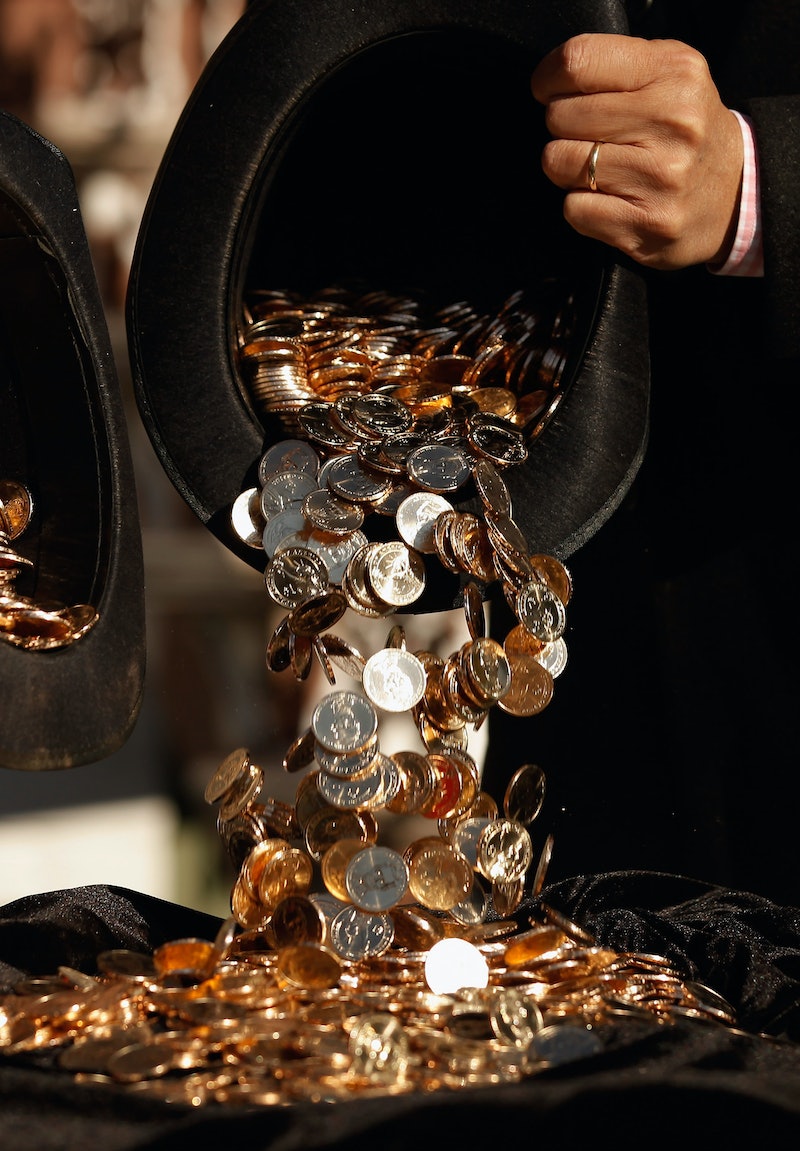 Like any red-blooded American, there are few things that I enjoy more than spending money that I don't have on things that I don't need. I'd like to argue that it's not my fault — after all, it's a scientific fact that shopping releases endorphins — but really, spending money as a form of entertainment is simply a bad habit, one that I let fester during my years working in the corporate world. In those days, denying myself a five-dollar latte seemed downright foolish; what would that five dollars get me in the end, compared to the fact that this latte was all that was standing between me and a Britney-style meltdown at the job I hated? The economics of it seemed to check out.

But my recent transition from corporate drone to freelance writer has left me with more than a new zest for life and excuse to wear pajama pants well into the evening — it has also left me with a freshly down-sized budget. Each of those five-dollar lattes, which I was still buying out of habit, seemed to have a little tag on it that said "You will die in the gutter."

I knew I had to do more than find new ways to save money — I had to do something to reset my relationship with money.

I felt relaxed and engaged, like I was finally taking the time to stop and smell the urine.

So when I heard about the idea of money-free weekends, I was intrigued. Money-free weekends are exactly what they sound like: you go an entire weekend without buying anything. As someone whose weekends have traditionally orbited around both fun (dinner! movies!) and boring (laundry! buying a new shower curtain!) activities that require spending money, I wondered how I could possibly pull it off.

Once I read through a few websites that listed suggested money-free weekend activities, I was even more put off: I was supposed to spend my weekend getting my financial papers in order? Or writing my will? As Rodney Dangerfield once quipped, "If it gets any livelier in here, a funeral might break out."

And yet, wasn't this part of my problem? The idea that financial solvency belongs to the boring nerds, and fun belongs to the people willing to go a few thousand bucks into credit card debt to attend Coachella? I needed to break out of this mindset, or I was going to be in a lot of trouble, very soon.

And so, I decided to try to have the most fun weekend possible, all without spending a single dollar.

Friday night gave me a false sense of confidence about how easy the weekend would be. My afternoon involved a free cappuccino paid for by my editor, followed by a free dinner paid for by my boyfriend's parents. These two events made me believe that perhaps my money-free weekend might proceed the same way my money-filled weekends usually went, only with other people picking up the check for some reason. Works for me.

As I'm sure you already realized, that is not what happened. I woke up on Saturday morning completely unsure as to how I was going to pull this off. I put off figuring that out by engaging in time-honored free activities like cleaning my toilet, dropping a bunch of stuff off at the Salvation Army, and pacing lightly around my apartment while gnawing on a chunk of Gouda for about 35 minutes. But eventually, I knew I had to go out into the real, free world.

Lots of money advice seems to gloss over the role spending cash plays in socializing, especially in big city/ small apartment situations, where most of your social interaction happens at bars and restaurants. But since none of my friends were moved to kick it freebie style this particular weekend, I was more afraid of feeling lonely than feeling deprived. It seemed like I was going to be on my own.

But I broke the seal anyway, leaving my house around 2 p.m. to go for a free walk around my neighborhood. This walk went on for the better part of an hour (as I had still not figured out what fun, free thing to do with myself), until I stumbled across a skateboarding and biking festival happening a few blocks away.

I hadn't paid attention to skateboarding or skateboarders since I was burning through my first pair of JNCOs in the late '90s. But, since it was free, I set off into the crowd, and took a spot to watch some athletes compete. And even a curmudgeon like me had to admit that watching people flawlessly pull of aerial biking maneuvers that logically should have resulted in their death was the coolest thing that I had seen in awhile.

After spending about 15 minutes pushing through the crowd and refusing to buy XXL Mountain Dew t-shirts (oh, how I was tempted), I moved on, but felt emboldened. When I had just moved to New York City and didn't have any friends, I used to take long walks just to see what I could see every day. It was what had convinced me that this was a worthwhile place to live, despite the mind-blowing rents and near-omnipresent urine smell.

Over the years, social events, long work hours, and eating fancy hamburgers that somehow cost $25 had replaced that wandering spirit. But Saturday felt like the old days. I walked on, further afield from my usual haunts, and was rewarded with a building covered in cuckoo-bananas graffiti. Looking around, I felt more alert and attentive than I usually did on days when the city streets were just a backdrop that I had to hurry past in order to make my next appointment. I felt relaxed and engaged, like I was finally taking the time to stop and smell the urine.

I was appreciating whatever the hell this is when I realized that I was pretty hungry. I was also a half hour walk from my house. In this moment, my groovy, good-vibes philosophizing about how money had cut me off from the things I loved immediately disintegrated, and I devolved into a hangry mess, power-walking back to my house to eat whatever I happened to have in my cupboards.

After an improvised a dinner of ravioli & whatever-is-in-the-fridge (baby carrots and some more Gouda), I decided that — given how tempted I had been an hour ago to say fuck it to the entire project and buy a muffin — I could probably not be trusted with the temptations that would pop up on a cash-free Saturday night out. I felt strong in my resolve to stay cash-free while I was on my own, but I imagined how easily it might weaken in the face of watching my friends enjoying $10 microbrews and overpriced appetizers.

If saving money became a new lifestyle for me, I knew that I would be able to figure out new ways to hang around my friends and not envy their expensive artisanal cheese platters. But I also knew that right now, my resolve was too weak. And so, I watched Netflix for a few hours before falling asleep.

I spent the morning eating a brunch lovingly paid for and prepared by my boyfriend at home (cash value: who can put a price on that?) (just kidding, cash value: $15). My boyfriend had a friend from out of town visiting all weekend, so he barely noticed my experiment — we only really saw each other at home at the end of the night, a time when money and buying stuff never came into play. At least love is still free (well, except for the cost of those brunch eggs).

Brunch successfully consumed, I went out to seek my fortune in my final cash-free day. Now that I had been an expert in money-free weekends for all of 24 hours, I was noticing a pattern: There is a lot to do for free on weekends — it's just mostly stuff you couldn't actually pick for yourself if you were in spending mode.

I passed a few tag sales on street — normally a weakness of mine, but luckily, they only seemed to be selling broken chafing dishes — and headed to a free outdoor concert where Marnie Stern was appearing (cash value: $20). Stern is one of my favorite musicians, but I could imagine having skipped the show for any number of dumb reasons if I had been spending money over the weekend — the sound quality outdoors wouldn't be as good as other times I had seen her, I had some very important loads of laundry to do, it's really important that I eat some $18 poached eggs, blah blah blah.

As I walked over to the concert, all those excuses sounded phenomenally stupid to me. The show was delightful, the sound quality just fine, I still had enough clean clothes for the rest of the week, and I didn't even miss the fancy eggs.

Heading back home after the concert, I found that the extreme sports festival was still going on, and realized I was actually eager to walk through again. I wasn't about to start hanging out at the local skatepark or anything, but I felt relaxed and adventurous enough to get into watching some guys skateboard over cars for a few minutes. Normally, I would have found this kind of weekend-long street fair nothing but a nuisance that kept me from getting to places that I needed to be. "But this isn't a nuisance," I thought to myself, "this is great! How am I usually such an asshole?" I was so overtaken with my newfound openness, I even took a free can of Mountain Dew (cash value: $2) when it was offered to me.

Conclusion: Even though it turned out that I really, really don't like Mountain Dew, I was glad that I tried it. My cash-free weekend had started out as an exercise in depriving myself, but it had turned into a weekend of simply being more open to experiencing the moment. It wasn't a burden; in fact, it was actually pretty cool.

I also learned that we (and by "we," I definitely mean "I") underestimate how broad an array of things we actually enjoy. It's easy to believe that the only thing that will be enjoyable in the moment is getting the exact, specific thing that you want, whether it's from Seamless, Netflix, or J. Crew. But it was nice to simply take what life was giving out for once, instead of filling every waking moment with ultra-specific to-do lists. It felt like a tiny vacation from adulthood.

I can't imagine myself permanently becoming better with money (or less neurotic) just because I managed to go one entire weekend without buying a pumpkin spice latte. But the weekend helped me reconnect with a lot of the interests and feelings I'd had back before I had started relying on money to create all my fun for me.

It was good to realize that, despite a boatload of cultural messages to the contrary, spending a little bit less isn't the end of the world. It isn't even the end of having fun.