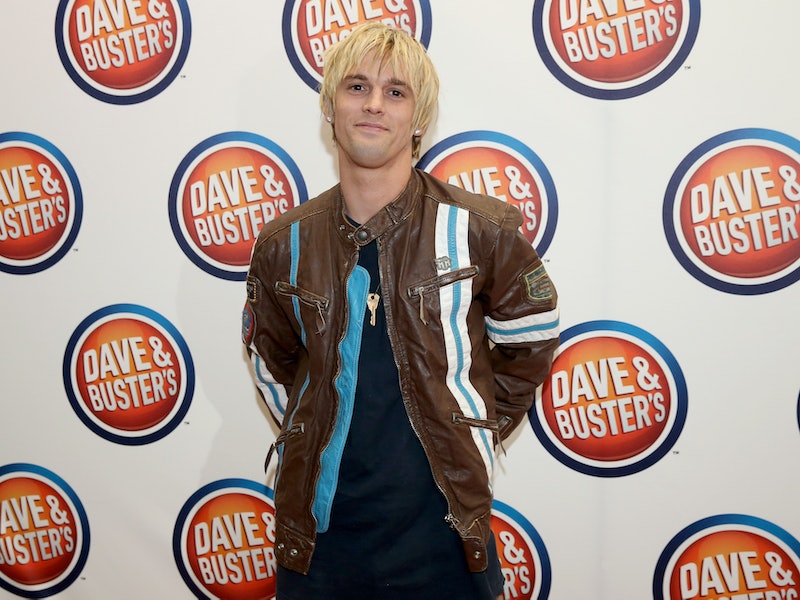 He was channeling his inner creepazoid in March when Aaron Carter sub-tweeted Hilary Duff about how she was the love of his life who he planned to re-woo and re-catch: "Don't be that stupid douche that loses the love of your life forever.. Like me..." Don't be that stupid douche that misuses ellipses... like Carter... But on Monday, Carter finally put his long unrequited love for Duff to rest, saying in an interview with Wenn, "If I'm too open about how I feel then people wanna nag and pick and poke at me. I don't know Hilary either. She don't know me and I don't know her. I just need to shut up now about it. I think it's time..."

That's right dawg, she DON'T know you and you don't know her. Duff responded earlier this year to Carter's declaration, giving a response to BuzzFeed worthy of our Queen Lizzie McGuire: "Yeah, we don’t know each other…so…yeah." L M F A O.

But Carter's "I'm giving up" statement really cries: I'm not giving up, feel sad for me." He continued on to say, "She's got a kid and she's married and I'm not trying to be that dude. That's not my intention. Hilary will always hold a very special place in my heart." Not knowing that "I'm not trying to be that dude" is basically translated loosely to "I'm a nice guy." No one cares, Carter, if Hilary has a special place in your heart. Least of all Hilary Duff... so... yeah. I mean, a decade has passed since y'all had any semblance of a relationship, and Duff has moved on and transformed herself gracefully a million times since then, so why can't you?

Some people might say that Carter's desperate cry 4 love is just a ploy to re-attach himself to Duff, who's been much more successful than her tween beau. I'm not saying I agree... but it's a strong possibility. But even if his miss you tweets were genuine, they weren't necessary. Why not just log you feelings on a personal blog that doesn't make the object of your affection so uncomfortable? It's almost Robin Thicke - Paula Patton level of weird and invasive. Maybe Carter and Thicke can start a lovers-scorned club, and leave their ex-ladies alone.