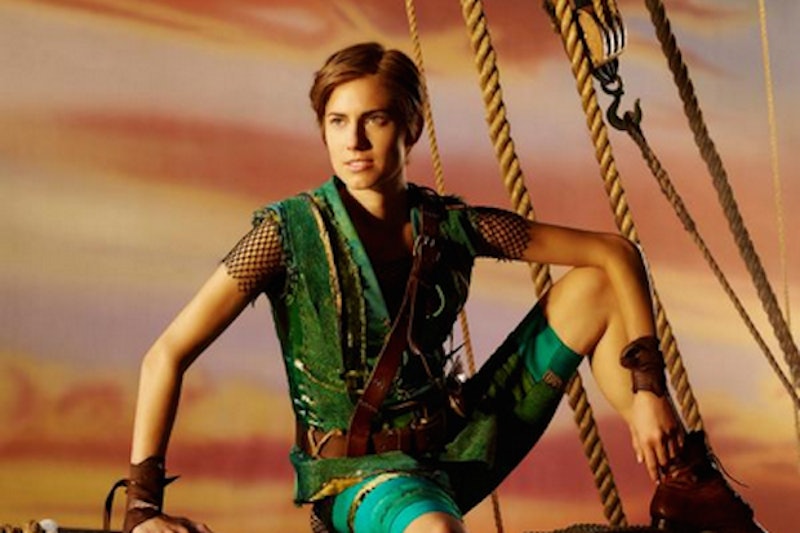 Allison Williams' pointed foot, Prince William doppelganger photo is no longer the latest on the Peter Pan Live! musical from NBC — on Monday, the roles of Wendy Darling and Tiger Lily were cast, being played by Taylor Louderman and Alanna Saunders, respectively. Both have Broadway credits; Louderman has been in the cast of Bring it On: The Musical, Annie, Joseph and the Amazing Technicolor Dreamcoat, Grease and Aida. Saunders' credits include Gypsy and A Chorus Line. Not too shabby.

Worth noting: Saunders is a descendant of the Cherokee people; a small victory that she will be playing the role of Tiger Lily, whiiiich in itself is hella problematic, but I digress. The casting comes in addition to the role of Kelli O'Hara as Mrs. Darling and (shriek) Christopher Walken as Captain Hook. Yes, that's right: Walken. That's enough to entice me to watch Peter Pan Live!, even though I'm skeptical about the production's quality after last year's live-action Sound of Music which was more panned that a pizza. Tough to say if NBC will step up their game on Peter, but so far, the cast is promising. I just really wanna know who's gonna play Smee to Walken's Hook — they better not eff that up. But hey, Williams has already played Pan, as we know from dad Brian Williams, and apparently Taylor Louderman has done her time as Wendy, too, as she proved in this cute Instagram:

One thing's for certain: there's no way Peter Pan Live! can beat the badness of Michael Bluth's role as maritime lawyer Peter Pan in The Trial of Captain Hook. So, there's hope after all.