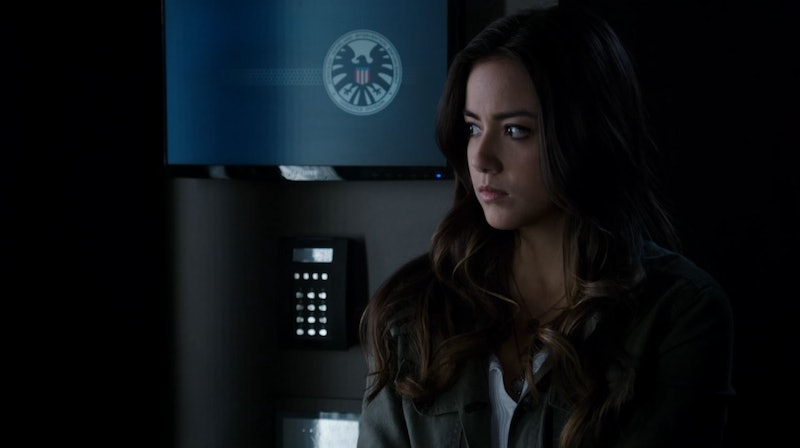 As a series named after a secret organization that was recently revealed to have been filled with tons of double agents working for an even more secret organization, it should come as no surprise that Marvel's Agents of S.H.I.E.L.D. provides more questions than answers for its fans. When Season 1 ended, we were left with many unresolved mysteries, but the one weighing most heavily on my mind is what Skye actually is. Yes, "what," because throughout the course of the season, we learned that despite Skye having spent her life being shuffled between foster homes on Earth and her only "ability" being computer hacking, she is definitely not a human. But Skye might be an Inhuman.

I'm not the first person to consider this theory, and there are a few things that lend it credence. First, let's quickly recap what we know about Skye's background — it's not much. It turns out S.H.I.E.L.D. wanted her to move between foster homes as a way of keeping her safe, because of the way in which she was found. When Skye was a baby, S.H.I.E.L.D. agents were called to an 0-8-4, or "object of unknown origin" in China. Most of the S.H.I.E.L.D. agents on the scene were killed and the entire village was destroyed by two "monsters," but a baby survived and was sent to an orphanage. The baby was Skye and as more details of the story were revealed, we learned that those monsters were actually her parents.

To be described as monsters and capable of taking down a team of S.H.I.E.L.D. agents and entire village, we know that Skye's parents are something that even S.H.I.E.L.D. isn't familiar with. As an alien-created species, Inhumans definitely fit this description. They are the results of a sort of genetic experimentation conducted on humans by the Kree, the large blue aliens who were featured in this summer's Guardians of the Galaxy. The Inhumans are basically superhuman and lived separately from us plain old people. In addition to the traits caused by their very creation, the Inhumans developed further abilities and deformities as the result of Terrigen Mist, which causes mutations.

The Kree connection also makes the Inhumans a likely fit for Skye. Another big mystery in Agents of S.H.I.E.L.D. surrounds the blue alien that GH-325 — the drug that saved both Coulson and Skye from death — is made from. Though clearly in a state of decomposition, the alien resembled Kree. This relates to yet another mystery on the ABC series, why Skye wasn't affected by GH-325 the way Coulson was. Perhaps it's because she already contains alien DNA and was created by the very creature whose own... something saved her.

If Skye is an Inhuman, she might not just be a random member of the mysterious race. A specific Inhuman character from Marvel comics bolsters this theory even further, Luna. Bear with me here. One of the members of the Inhuman's royal family is Crystal, who broke a major rule by marrying someone who wasn't Inhuman — Quicksilver, a mutant who appeared in X-Men: Days of Future Past and will also be in The Avengers: Age of Ultron. Crystal and Quicksilver had a daughter and despite, or perhaps because of, being the child of two different mutated species, Luna was just a regular human with no special powers or other mutations. And not to get too superficial here, but Luna is named after the Moon, where she was born, and well, the Moon is in the sky so...

There are two issues with this specific theory, as in The Avengers, Quicksilver will be way too young to be Skye's dad. Then there's the fact that Luna is portrayed as a child in the comics. However, Agents of S.H.I.E.L.D. could change the identity of Skye's father to one of the other characters Crystal has a romantic relationship with in the comics, and Skye could just be the grown-up version of her. It would explain why she doesn't have any powers, as Luna does eventually get powers in the comics, but only after being exposed to some Terrigen Mist, which clearly Skye was not since she was raised by humans.

I know, it's a lot. But it would make sense. And there's one more reason that Skye might be an Inhuman that is extremely easy to understand: it would unite the Marvel Cinematic Universe. The Avengers franchise and Agents of S.H.I.E.L.D. all take place within the same expanding storyline, with shared characters and the actions of one film affecting another, as well as the TV series. If the alien used to create GH-325 is a Kree, that connects Agents of S.H.I.E.L.D. to Guardians of the Galaxy, the only film to seem almost completely removed from the rest of the universe. If Skye is an Inhuman created by Kree, that's an even more direct connection between the show and Guardians.

Oh, and there's one more kind of important thing. Marvel is rumored to be making an Inhumans movie. According to Collider, there is a script for an Inhumans movie and the studio is just looking for a director. And what better way to get people excited for a new Marvel franchise than to reveal that a pre-existing character is an important part of its story? Besides, Marvel has to find some way to connect Guardians to the rest of its films, since it wasted the post-credits scene on an unnecessary Howard the Duck reference and Coulson didn't make an appearance.

Hopefully Season 2 will finally reveal Skye's real background, or at least give some more definitive clues. The Inhuman theory is certainly promising, but Marvel has created so many species that have gone through such different things in various comic storylines that really, anything is possible. The only thing that's fairly certain is that eventually, Guardians will somehow be pulled into the rest of the Marvel Cinematic Universe and if it can't be Skye who connects them, there's only one other acceptable alternative.

I have a feeling that Baby Groot would fit in just fine on The Bus.