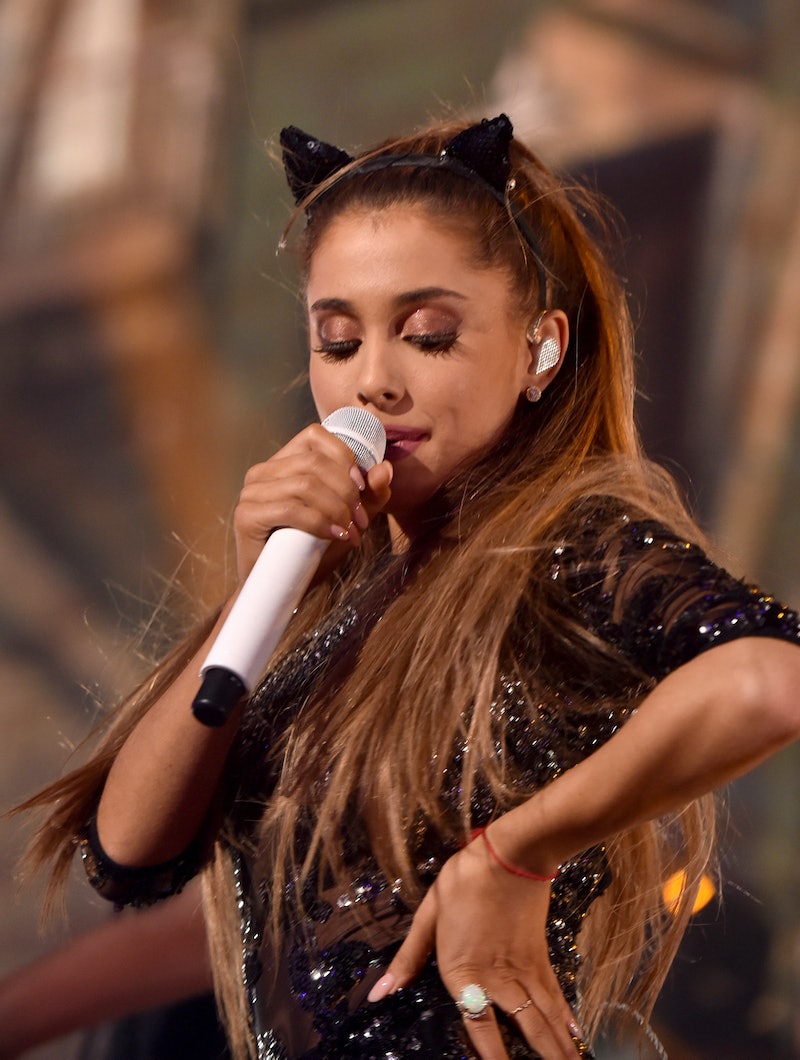 Ariana Grande is officially toying with our emotions, you guys. No, I'm not talking about whatever new possibly-true rumor is floating around about what a diva she is. I'm talking about her love life. Currently, word on the street is that Grande is dating Big Sean, but neither of them have come forward to confirm that they're anything more than friends. The most we get out of either of them is a "no comment", which, unless you take that as proof that something has to be going on to refuse to comment on, doesn't actually count as a confession. Now Grande has posted an Instagram photo of herself and Big Sean — except we have no idea if that's her or him.

The image, which was simply captioned ":)", features two silhouettes. One is clearly female and one is probably male, but that's about as far as we can establish for certain. The female silhouette has two bumps on her head resembling Grande's trademark cat ears and the male silhouette appears to be wearing a backwards cap. Either that, or both silhouettes just have incredibly weirdly shaped heads. So is this a picture of Grande and Big Sean? Is this their first official picture as a couple or what?

We have no idea and that's probably exactly what Grande was going for. If she wanted us to know about her relationship with Big Sean, whether it's romantic or not, then she would have told us about it herself. However, Grande is a social media queen who frequently posts to Twitter and Instagram, so it would be downright out of character for her not to immortalize her life through photographs. In this way, she can have her cake and eat it too — like an inside joke that's just between the two of them and the millions of fans she's driving mad with frustration.

Of course, that's assuming that's even Big Sean in the picture. After all, Ariana Grande is only five feet tall while Big Sean is five feet and eight inches tall. The male and female figure in the photograph aren't eight inches apart from one another in height. Then again, it can be argued that Grande could be wearing her trademark go-go boots with the high heels or standing on something or even being lifted. We don't know. Because Grande is teasing us by leaving this a mystery. However, I am willing to accept this as the first photograph of Big Grande or Ariana Sean or whatever adorable ship name the Internet plans to bestow on these two maybe-lovers.

Mainly because, well, those silhouettes do match the physical descriptions we've come to know and love from Grande and Big Sean. If it turns out to just be one of her friends in a hat then I will be profoundly disappointed.

More like this
Confusion Reigns After Kanye Changes His Instagram Profile Pic To Kris Jenner
By Jake Viswanath
Kim Kardashian Reveals Her Response To Kanye’s Fashion Opinions
By Jake Viswanath
Molly-Mae & Tommy Fury Shared The Cutest Gender Reveal Video
By Sophie McEvoy and Sam Ramsden
Who Is Nick Cannon Dating & How Many Kids Does He Have?
By Jordyn Tilchen and Radhika Menon
Get Even More From Bustle — Sign Up For The Newsletter