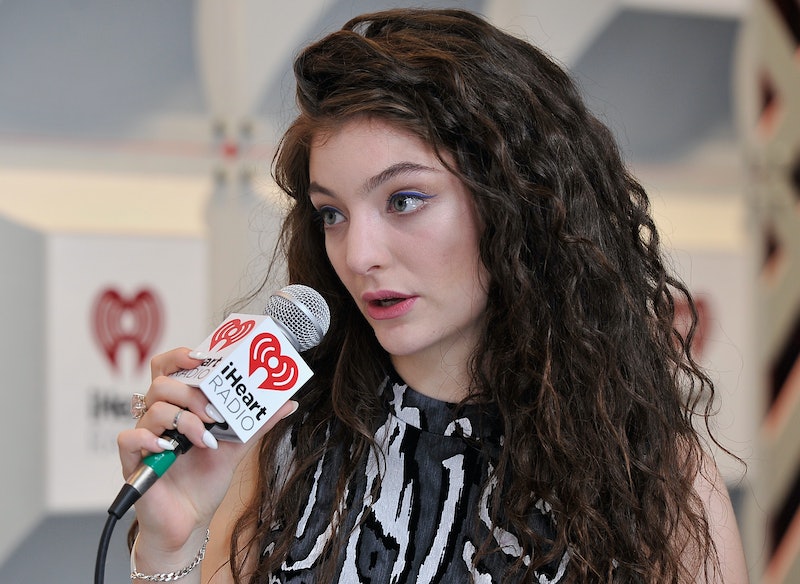 If you weren't already convinced that The Hunger Games: Mockingjay, Part 1 is going to be the best film in the series (at least until Part 2 comes out), then Lorde curating the music for the Mockingjay soundtrack probably changed your mind. Lorde and The Hunger Games is a match made in heaven, so much so that it's a shock that no one ever thought of this before. Her entire aesthetic is straight out of a young adult dystopian novel and her songs speak to every person who has ever felt on the fringes of life or disadvantaged in some way. On Monday, Lorde revealed the title and release date of her Mockingjay song and it already looks so true to the film.

The song is called "Yellow Flicker Beat" and the single's cover looks like a damaged grey hardcover book, embossed with Lorde's name and the mockingjay symbol in a circle of sunbursts. According to the caption Lorde included with the cover, the single will be released on September 29. Earlier in September, Lorde dropped a clue about the song in the form of a handwritten message said to be the first line of the song: "I’m a princess cut from marble, smoother than a storm." That makes up just about everything we know about the song and most of it is guesswork anyway.

At this point, short of getting to hear the song ourselves on September 29, there's only one way to have a good idea of what "Yellow Flicker Beat" will be about. Looking at the songs that Lorde has done in the past gives us a good idea of her aesthetic and what we can expect from this new song.

Her very first single, "Royals", sang a tale of life on the other side of the tracks, where we don't have any of the money or the riches or the luxury lifestyles that our favorite celebrities sing about in their songs. It really established Lorde as the kind of artist that we could all relate to. In the Hunger Games, the severe distance between the classes among the various Districts of Panem is what contributes to the rebellion, so Lorde was really the perfect person to pick for this album.

For all of the darkness Lorde describes in "Team", the most important line that stands out from the chorus is "we're on each other's team". The rebels might not like each other and they might never have worked together normally, but having a common enemy has made heroes out of people from all walks of life. "Yellow Flicker Beat" could be all about trying to find your place in a group and becoming stronger as a result.

Lorde is a teenager, so it should come as no surprise that many of her songs speak to the "no one understands me" phase that all teenagers go through. The rebels have a good reason to be rebelling against the Capitol, so it's not as though an anti-authority bent in "Yellow Flicker Beat" would be out of place.

With an opening line like "I'm a princess cut from marble", there can be no doubt that "Yellow Flicker Beat" is probably an independence anthem that's all about staying strong in the face of adversity. A heroine like Katniss is forced to be strong, not only for herself but for the rebels looking up to her, and that kind of inner strength is the kind of thing that Lorde's music encourages.

Lorde has never had a problem with being different. From wearing all black to award shows to proudly celebrating the fact that she's never seen a diamond in the flesh — until recently — her songs have the common theme that individuality isn't a bad thing, even and especially when it feels like it is. Nothing makes you stand out in a crowd faster than being the mockingjay, so "Yellow Flicker Beat" could be celebrating Katniss as a person rather than just as a symbol of the rebellion.

Maintaining hope in the midst of a war isn't just difficult; it's downright impossible. "Yellow Flicker Beat" calls to mind images of a light that's flickering and on the verge of going out, so perhaps it will be an inspiration anthem about giving up hope and finding it again when you have something to fight for. Regardless, I think we can all agree that whatever song Lorde decided to put on the Mockingjay album will be another hit for her.

Check out the single art below.