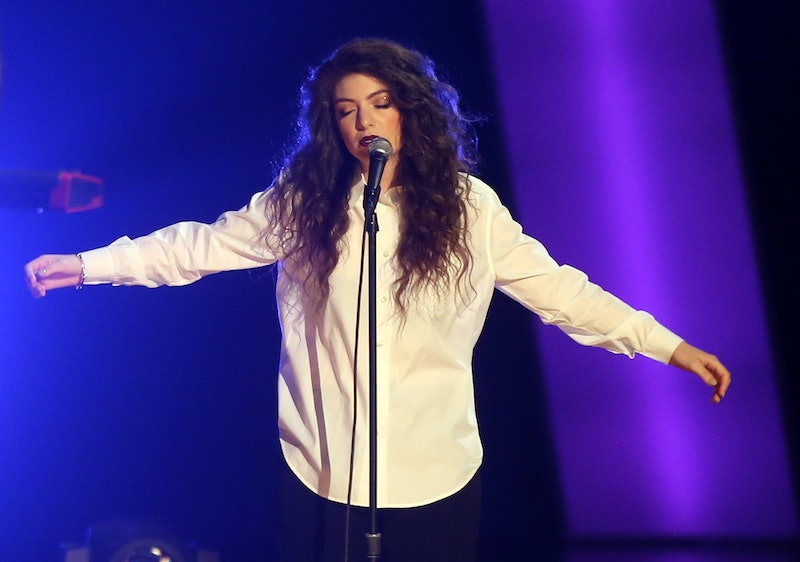 Here's some great news for you, if you're a Lorde fan or a Hunger Games fan. Stereogum reports that Lorde will be curating the Mockingjay Part 1 soundtrack, which means you know it will have the brooding, melodic sound that made her such a star. It's a great pairing: Lorde is particularly dark for a teenager, and it's not like The Hunger Games trilogy is joyous, light fare. (Uhh... kids killing each other? I wouldn't call that a rom com for the ages.)

Plus, Lorde has experience with The Hunger Games already; she recorded "Everybody Wants to Rule The World" for Catching Fires's awesome soundtrack. This time around, she'll not only record a single for the album, but she'll be hand picking every single artist who will be on the album. Any teenager who writes lyrics on her notebook and who feels misunderstood by the universe is probably psyched to hear this, as it sounds like it's going to be an album of awesome, emotional anthems.

But this also means another thing; Lorde is more than just a singer and songwriter. She's got an eye for stuff — it takes a lot to curate music for a movie, you've gotta understand the emotional pulls of what's happening (just, uh, ask Zach Braff). Clearly, Lorde has a cinematic eye for production. But fans shouldn't be too surprised to see her take on this role, as they've known that she's super talented from the get-go.

Still, Hunger Games + Lorde = incredible. As an adult woman, even I'll say, this is a match made in Panem heaven. Okay, Panem with its sinister Capitol is a pretty nightmarish place, but let's disregard that for a moment and just focus on how J. Law will kick ass as Katniss with awesome background music.

Fans aren't the only ones who are psyched to hear this news; Lorde happens to pretty excited herself. She tweeted:

It only feels appropriate to listen to "Everybody Wants to Rule The World" right now, so let's do that: